‘We know that a lot if not most Covid transmission is happening in private homes,’ Tánaiste says

Micheal Martin has announced a nationwide ban on visits to homes or gardens in almost all circumstances, except for providing care to children or elderly and vulnerable people. Cavan, Monaghan and Donegal will also move to Level 4. Video: RTE 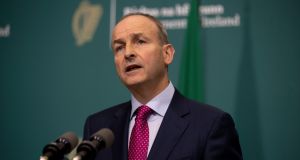 Micheal Martin during a media briefing.”It will pass. We will make it through this pandemic,” he said. PhotographTom Honan/Julien Behal Photography/PA Wire

The Government has announced a nationwide ban on visits to homes or gardens in almost all circumstances, except for providing care to children or elderly and vulnerable people.

It has also announced that Cavan, Monaghan and Donegal will move to Level 4 of the Government’s Living with Covid plan from midnight on Thursday until November 10th.

Under Level 4, people should not have any visitors to their homes, the maximum number of attendees at a wedding is six, non-essential retail will close, and all non-essential workers are to work from home, Taoiseach Micheál Martin said as he announced the move. He said construction and manufacturing will remain under the right conditions.

Under the new restrictions for the Level 3 counties, people will be allowed to meet in groups of up to six people from up to two households in outdoor settings away from home and garden while maintaining social distancing - including for exercise and dining. The existing exemption which allows for Club Championship games to be played behind closed doors has been removed and sports teams will be told they cannot train unless social distancing can be observed.

Mr Martin said the new Level 3 status has been in palace for a week and the Government is studying infection patterns as Level 3 can have a “significant impact” on the spread of the disease.

“There are concerns regarding the full application of Level 3,” he said, including people going into the workplace, slippage in retail and personal services, and people going to each others homes.

Mr Martin said “I know how difficult this is for everyone and I understand the deep frustration people feel”.

“We are on a journey with this virus and we have come to a difficult point in that journey,” Mr Martin said. He said the numbers of infections are “just too high”.

He said data from Northern Ireland is “hugely worrying” and that discussions with Stormont would continue in the coming days.

He said figures in the Republic were also “very worrying” with 190 cases per 100,000 nationally, in Monaghan 360 Donegal 353 and Cavan 571. The implications for local hospitals and public health “is obvious and very serious”.

“We are living in difficult times and things may indeed get worse before they get better,” he said

“It will pass. We will make it through this pandemic,” he said.

Tánaiste Leo Varadkar said “We know that a lot if not most Covid transmission is happening in private homes” .

“Sometimes people associate that with house parties, but it’s not just that,” he said, saying it was family gatherings, and friends coming over for a drink or cup of coffee.”

“All those things have to stop,” he said.

He said the new Covid Restrictions Support Scheme will be available and backdated to budget day, and applications will be prioritised from the three counties being put into Level 4, and it will apply to businesses such as hairdressers that have to

“There will be thousands” laid off in the coming days he said, with the pandemic unemployment payment available. “We will try and get you back to work as soon as possible”

“Coronavirus is on the march,” he said, adding “that it is more likely more counties will move to Level 4 than the reverse”.

Mr Martin said that the measures will have a significant economic impact, pointing out that 20,000 extra people came onto the pandemic unemployment payment after Level 3 restrictions were introduced. He said he didn’t regret the decision not to move to Level 5 when it was recommended by Nphet.

Schools in the impacted counties will remain open, although working from home will be strongly encouraged for non-essential trades, he said. The Taoiseach said the mid-term break will remain at one week. Weddings planned for the coming weekend will be allowed to continue.

He said people within the three counties can travel for work and education and essential purposes, but will be asked to exercise their judgement and discretion in doing so. He said work is underway on additional penalties designed to enhance enforcement, and they would be ready next week.

He said Halloween was not cancelled but it would be “different” and that trick or treating would not be advisable and that no street parties of any kind for anything should take place.

Regarding Christmas, he said if people adapt and change their behaviour “of course we can have a good Christmas and enjoyable Christmas”, but that it would be a “different Christmas,” adding that “until we get a vaccine normal life will not resume”.

Earlier on Wednesday, public health sources expressed concern not only about the high level of infection in the border counties, but around the entire country.

While there is evidence that the level of transmission in Dublin is being impacted by Level 3, it is not falling as quickly as public health officials would like. Chief Medical Officer Tony Holohan, along with his deputy Dr Ronan Glynn, met the oversight group led by Martin Fraser on Wednesday before the Cabinet meeting was agreed.

With the National Public Health Emergency Team (Nphet) set to meet tomorrow, it was expected that escalated measures would be recommended.

There were 1,095 new cases and five further deaths reported in the State by Nphet on Wednesday.

Minister for Health, Stephen Donnelly was earlier asked about people crossing the Border to access alcohol given the new 8pm restriction in the North, Mr Donnelly said he believed people would be “hard pressed” to convince authorities that a “trip to the offie” counted as an essential journey.

Northern Ireland is going into an intensive period of restrictions for four weeks, the North’s First Minister Arlene Foster confirmed in the Stormont Assembly on Wednesday.

Under the new rules takeaways and deliveries will be allowed but pubs and restaurants must close for a four week period, said Ms Foster.

Off-licences and supermarkets will not be allowed to sell alcohol after 8 pm.

Churches can remain open but weddings and civil partnerships will be limited to 25 people. Receptions will not be allowed. This will apply from Monday.

Funerals will be limited to 25 people with no pre or post funeral gatherings.

1 Cork shootings: ‘Devastation was impossible to imagine’, funeral hears
2 Strong earthquake with a magnitude of up to 7 hits Turkey and Greece
3 US election: ‘Trump would not be caught dead here unless he wanted our votes’
4 Storm Aiden prompts nationwide weather alerts for Halloween
5 First full moon on Halloween night since 1955 will be rare ‘blue moon’
Real news has value SUBSCRIBE