Miriam Lord: Look at the size of it! Budget Boys go on a monster Covid spending spree 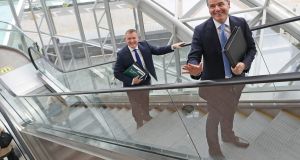 The biggest budget in the history of big budgets.

Look at the size of it!

The Budget Boys couldn’t resist drawing attention to this when they came to the Convention Centre to show off their colossal disbursements.

“The scale of this budget package is unprecedented . . . Nearly eight times last year’s budget . . . Most ambitious budget . . . Largest budget in the history of the Irish State,” they proudly declared.

Over the 90-minute course of two speeches, Paschal Donohoe and Michael McGrath didn’t just loosen the national purse strings – they whipped them out with a vengeance and then burned the purse.

They intend to spend almost €18 billion on a CoronaBudget spree, spreading their cash wider and more rapidly than a virus at a White House reception.

All this was trumpeted in advance to the media, as is now the tradition in these days of modern, no-surprise budgets.

This led to a gentle dig from the Ceann Comhairle when he issued the usual reminders to TDs not to put any information from their advance copies of the budget statements into the public domain until the Minister says it first in the chamber.

“I suppose that’s in case Morning Ireland or the national media missed anything so far,” Seán Ó Fearghaíl dryly mused, to guffaws from all deputies, well in on the joke.

Paschal and Michael were every inch the Blues Brothers in their bland navy suits and ties in different shades of blue. That wouldn’t have been allowed in the old days of Fianna Fáil. But they’re all shot through with blue now.

So said Labour’s Ged Nash, surveying the highly expensive handiwork which had just been unveiled by the Fine Gael Minister for Finance and the Fianna Fáil Minister for Expenditure and Public Reform. After a long confidence and supply “engagement” between the parties and a Government wedding in June, they finally consummated their marriage on budget day.

“Fianna Fáil and Fine Gael have now become one, for better or for worse.”

As analogies go, this one would put anyone off their oats.

Ged decided to play it for laughs for some of his speech. “For the sake of the country, I hope the next few months beat their disastrous honeymoon period of self-inflicted cock-ups, exploding clown cars and comical games of one-upmanship.”

Then, as the billions in supports and subsidies washed over opposition bodies in the Convention Centre auditorium, he conceded: “All of that being said, it would be churlish of me and my colleagues not to recognise that there is much to welcome in this package.”

They’re made of sterner stuff in Sinn Féin.

Some people may have been feeling a little sorry for Pearse Doherty, who had the unenviable task of staring down the bottomless pit of pandemic funds promised by Donohoe and McGrath to find fault with their largesse. But, predictably, this was no problem to him or to his colleague Mairéad Farrell, who spoke after him.

They rubbished it from start to finish.

Where was the “certainty”? he demanded. “This budget has failed to provide that certainty.”

With a global pandemic in full swing and a dangerous Brexit steaming down the tracks, it would have been easier for the Ministers to spin their words into solid gold and turn them into bracelets than to stand up and promise – never mind provide – certainty.

“Sinn Féin would have taken a different course,” persevered Doherty, shouting into a solid wall of spending.

Back in the old days (last year), the mere thought of the Government shelling out so many billions would have caused consternation. It feels a lifetime away since Leo Varadkar’s administration was sharply rapped on the knuckles by the Irish Fiscal Advisory Council (IFAC) for not keeping to its recommended spending guidelines.

Tuesday must have been a difficult day for the members of the IFAC, but they will have heeded the message from the Ministers that these are not normal times. We hear they’re off the oxygen now, thanks to the brandy.

Brendan Howlin, former Labour leader who was minister for public expenditure two governments ago, was like a hen on a hot griddle, up and down the steps from his seat on the balcony as the afternoon progressed.

The Minister for Education was dressed for business, wearing her trademark pearls the size of gobstoppers

After years of trying to keep the public finances in check, when he could hardly draw breath without referring to FEMPI (Financial Emergency Measures in the Public Interest), the deluge of funding announcements must have sounded shocking.

Capital infrastructure projects all over the place, to,o in this infra-penny, infra-18-billion budget. Could this finally spell a new dawn for the Dunkettle Roundabout?

Thanks to the Covid, it seems like every Minister in Cabinet got their shopping list of demands delivered. They had to be nailed into their seats for the speeches to prevent them running outside to do interviews. Seldom is wonderful, even if it’s taken a pandemic and the threat of a financial meltdown to see them smiling on budget day.

The Minister for Education was dressed for business, wearing her trademark pearls the size of gobstoppers and a sparkling Lady Hale spider brooch. Lady Hale was the UK Supreme Court judge who decided that Boris Johnson unlawfully prorogued the UK parliament, and her brooch garnered almost as many headlines as her headline ruling.

No major government speech is complete without a comforting quote at the end. Paschal played safe with one from Seamus Heaney: “If we winter this out, we can summer anywhere.”

Michael went for a line from JFK’s address to the Dáil in 1963: “It is that quality of the Irish – that remarkable combination of hope, confidence and imagination – that is needed more than ever today.”

There was no applause for either Minister when they finished speaking in the atmosphere vacuum of the Convention Centre. Had this been the Dáil chamber in Leinster House, they would not have been so shortchanged.

They want their efforts to keep the country ticking over until the twin threats of Covid and Brexit pass.

And, more than anything, the Budget Boys hope they will be The Last of the Big Spenders.