‘The facts don’t lie, we have to be stricter for ourselves’: The Netherlands goes into partial lockdown 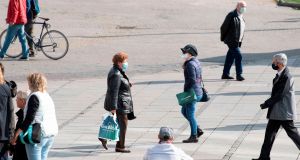 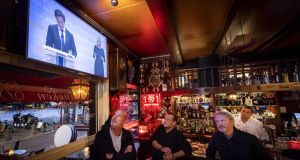 Employees of cafe Marcella in Amsterdam watch a broadcast of a press conference of the Dutch prime minister and health minister on Tuesday on new measures taken to tackle the spread of the Covid-19 pandemic. Photograph: Remko de Waal/ ANP/ AFP/Getty 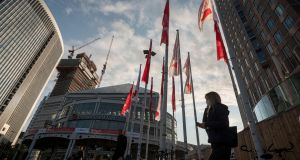 Flags at the 2020 Frankfurt Book Fair, the world’s largest fair for books, taking place in Frankfurt in Germany on Tuesday on a smaller scale this year. Photograph: Photograph: Thomas Lohnes/EPA

European governments are adding new restrictions and calling on citizens to make sacrifices in a bid to contain a record increase in coronavirus cases, with the Czech Republic closing schools and the Netherlands shutting down virtually all nighttime activity.

Around the world cases of the coronavirus topped 38 million, according to Johns Hopkins University data.

Saying measures needed to stop the virus “will hurt,” Dutch prime minister Mark Rutte announced what he called a “partial lockdown” on Tuesday evening, with sales of alcohol to be banned after 8 pm and bars, restaurants and coffee shops to be closed altogether. Citizens are being urged to avoid public transportation where possible.

“The facts don’t lie, we have to be stricter for ourselves, and stricter on our own behaviour,” Mr Rutte said at a televised news conference. Health minister Hugo de Jonge warned that a total lockdown could be the next step if the new measures don’t work.

UK prime minister Boris Johnson announced that bars and pubs will be closed in the worst-hit parts of England beginning Wednesday, even as his top health adviser warned that won’t be enough. While the opposition Labour Party called for a short lockdown to halt the contagion, Mr Johnson told Conservative lawmakers on a Zoom call Tuesday that he’s against a new nationwide lockdown, people familiar with the meeting said.

Germany’s new coronavirus cases increased at their fastest pace since the height of the pandemic in the latest sign of how Europe is struggling to keep the disease in check. The region’s largest economy will evaluate its own next steps on Wednesday.

Ms Merkel stopped short of ruling out a second lockdown for her country, saying that authorities must seek to avoid such a step. She’s preparing to meet with the premiers of Germany’s 16 states on Wednesday to decide on measures such as testing in nursing homes and isolating travellers from high-risk areas.

Europe recorded 700,000 new cases last week, the most since the pandemic began, the World Health Organisation said in its latest report. But rather than reviving national restrictions, officials are focusing on local measures amid concerns about hammering economies again and sparking unrest.

Relatively low hospitalisation and death rates have fuelled public resistance to harsher curbs. But authorities expect the number of severe cases to increase as more older people get infected and have warned citizens against thinking the virus has lost its bite.

The EU loosened aid rules to help fight the economic fallout from crisis. The bloc also sought to provide some clarity to a confusing array of travel rules, signing off on a common threshold for imposing entry restrictions.

Under the non-binding plan, unfettered travel will be allowed between regions with fewer than 25 new cases per 100,000 people for the previous 14 days, and with fewer than 4 per cent of tests showing positive results. No member state is currently below the threshold.

The Czech Republic, among the countries facing the fastest surge in recent weeks, banned alcohol consumption in public, limited outdoor gatherings to six people and closed down schools, restaurants and bars through early November.

Legislators in neighbouring Slovakia quarrelled over virus measures, with premier Igor Matovic calling economy minister Richard Sulik a “saboteur” after the latter publicly questioned a decision to ban indoor serving of food and drinks in restaurants. Relations in the coalition have been fragile since elections seven months ago and Mr Matovic’s ratings have dropped as people blame him for an inadequate response to the pandemic.

Italian prime minister Giuseppe Conte on Tuesday imposed new measures including ordering bars and restaurants to close by midnight, banning people from gathering outside them from 9pm, and limiting receptions for events such as weddings and baptisms to 30 people.

The latest set of regulations “will require new sacrifices,” Mr Conte said Tuesday. Reiterating that the government’s goal is to avoid another crippling lockdown, Mr Conte said that “to protect the economy and people’s health at the same time, we need to respect these rules.”

“Alas, the epidemic continues its ascent,” health minister Olivier Veran said during parliamentary question time. “This wave of hospitalisations that has started is worrisome.” – Bloomberg