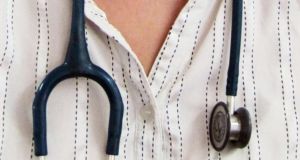 A committed approach can see doctors and the Government reach agreement on a new deal that will ‘benefit patients in every community’ and in return provide rewarding careers for general practitioners, a Minister of State has said. File photograph: Hugh Macknight/PA Wire

Talks with GPs on a new approach to fees in return for service improvements are expected to begin in the coming weeks, a Minister of State has said.

A committed approach could see doctors and the Government reach agreement on a new deal that would “benefit patients in every community” and in return provide a rewarding career for general practitioners, said Jim Daly, who has responsibility for mental health.

Mr Daly told the annual conference of the National Association of General Practitioners that Minister for Health Simon Harris and his officials were developing their approach and would be briefing the Cabinet on the matter next week.

If commitment came from all sides, Mr Daly said he believed it would be possible “to reach an agreement in the coming months on a package that will see service improvements across general practice which will benefit patients in every community and will contribute to making general practice a sustainable and rewarding career into the future”.

A new GP contract is one of the key elements underpinning the Government’s entire healthcare reform strategy. While talks went on for about a year up until last October, no tangible progress was reported.

GPs are also pressing the Government for a reversal of cuts imposed following the economic crash.

Mr Daly said: “I understand Minister Harris’s aim is to develop a contract which has a population health focus, providing in particular for health promotion and disease prevention and for the structured ongoing care of chronic conditions.

“We need a contract which is flexible and is able to respond to the changing nature of the GP workforce. It must also include provisions in relation to service quality and standards, performance, accountability and transparency.”

Mr Daly said it was essential that engagement on GP contractual issues was “aimed squarely at meeting the substantial challenges, current and future, [that] the health service and general practice face”.

The total fees paid to GPs under the General Medical Services scheme had increased from some €427 million in 2009 to about €517 million last year, he said. In the same time the number of GPs contracted by the HSE under the scheme had risen from 2,139 to almost 2,500.

“It is also worth noting that there are only 23 GMS panels that do not have a permanent GP in place – a vacancy rate of less than 1 per cent,” Mr Daly added.

In a statement, Mr Harris said one of his “key objectives” was to agree contractual changes.

“I want to secure agreement on meaningful improvements in the services that GPs provide to patients and see additional resources provided to general practice to support these services,” he said.

The Minister said he was committed to developing a new multi-annual approach to fees, which he called “a significant step” in responding to concerns from GPs about the effect of financial emergency legislation imposed during the recession.