Leo Varadkar calls for Ireland to tackle its alcohol problem 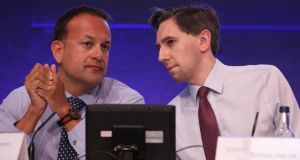 Taoiseach Leo Varadkar and Minister for Heath Simon Harris at the launch in Dublin Castle of the State’s new national strategy on drug and alcohol use. Photograph: Collins

Taoiseach Leo Varadkar has described drugs as a greater killer than road crashes and portrayed Ireland as a country that is dependent on alcohol.

At a press conference in Dublin Castle, he said he was determined the Public Health (Alcohol) Bill would become law by the end of the year.

The Bill proposes to place restrictions on the sale of alcohol, separate it from other products in retail outlets, and limit advertising. Its progress has been stalled following an intense lobbying campaign in the Seanad.

Mr Varadkar said Ireland, as a country, has a serious problem with alcohol.

“It is the main drug of abuse in Ireland. Like all drugs of abuse, it causes people to behave in ways that they would never consider if they were sober.

“We need to face up to that as a society. The solution is not prohibition. The solution is denormalisation, making sure that alcohol is no longer treated as a normal grocery, something that you buy in a shop as if it were like buying fruit or buying a pizza.

“It’s not. It is a drug. Prohibition won’t work. But we must make it less normal and provide more supports to enable people escape from addiction.”

The Taoiseach was speaking at the launch of Reducing Harm, Supporting Recovery, the new national strategy to reduce drug and alcohol use in Ireland over the next years.

The launch was attended by Minister for Health Simon Harris and the Minister for State with responsibility in this area, Catherine Byrne, who has driven the initiative. A task force, headed by former INTO general secretary John Carr drew up the report.

There are 50 actions identified in the strategy, including some radical changes in strategy. It includes a recommendation to decriminalise the possession of very small amounts of proscribed drugs, as well as the provision of injection rooms, and the introduction of a raft of new services, many of them directed at communities and age groups that are particularly vulnerable to drug abuse.

Other actions include plans to identify and help the children of addicts from avoiding following their parents into drug dependency, or mental health issues, post-prison programmes to help people steer clear of drugs.

The strategy tackles the problem of addiction from a health perspective rather from a criminal perspective, even though the Taoiseach emphasised that anyone supplying prohibited drugs would face the full rigours of the law.

“Treating substance abuse and drug addiction as a public health challenge, rather than a criminal justice matter, helps individuals, helps families and helps communities. It reduces crime because it rebuilds lives,” he said.

“It’s just one part of the strategy,” said the Taoiseach, saying a group was being established to see if it would work in an Irish context, and it would report back within 12 months.

He said elsewhere, including in Portugal, it had helped reduce crime and the spread of HIV. but add there were also “counter-views on whether it is the right way to go”.

Ms Byrne said no location had yet been identified for injection rooms. But asked about local reaction, she said that such rooms would “stop people dying on the street” from infected syringes.

“It is clear we need to act now to tackle the huge problem we have, as a country, with drug and alcohol use,” Mr Harris said. “If we are to reduce the dreadful harm caused and support recovery, then we must ensure that all of our efforts are people-centred and health-led.”