‘We have achieved our security on the cheap,’ says ex-director of military intelligence

Garda personnel fire blank rounds and use stun grenades during a mock international terror attack at the Docklands Rail Station in Dublin. 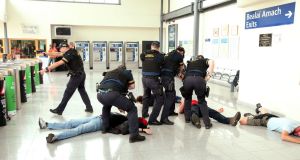 Ireland’s counterterrorism preparation is “grossly negligent”, a former senior Army officer said in Glenties during a MacGill summer school discussion about the security threat against Europe.

In the mind of Islamic State, Ireland was “part of the Crusader West” and therefore a target, he said.

“The Irish Government by its inaction is putting the security of this State, its citizens, and our EU partners at risk.

“Not alone does this put the lives of our own people at risk but also those of our close neighbours in the UK, and elsewhere in Europe,” said Mr Murphy, a retired lieutenant colonel and former deputy director of military intelligence in the Army.

“We need to ensure that the terrorists do not get the upper hand otherwise this State will be playing catch-up. While we still have time we need to change our security culture and our intelligence structures.”

Mr Murphy said Ireland has been protected from potential adversaries by Nato, but more importantly by the UK.

“We have achieved our security on the cheap,” he said. “Today, you can still hear Irish people, including some politicians, saying that as a neutral country no one wants to harm us. They appear to be ignorant to the fact that our world has changed and that our security environment has become unpredictable and unstable.

“Anyone who thinks this Salafist jihadi threat will disappear with the defeat of so-called Islamic State forces on the ground are very much mistaken,” he said.

“Not alone do we have to worry about who is already in this State but we also have to take into account those who can freely travel and reside here because of our EU membership. For example, it is estimated that in the UK there are 23,000 extremists, Germany 24,000, Belgium 18,000, France 17,000 and even in neutral Sweden there are an estimated 2,000 extremists. All of these extremists have access throughout the EU, including here in Ireland.”

“Ireland’s security culture falls within the immature category. That is to say that as a State there is limited risk awareness, our security measures are purely reactive, and there are limited resources attached to security provision,” he said.

“I can tell you here today that any expert conducting an inquiry will examine our current intelligence architecture against the reasons for intelligence failure. It will not take them very long to come to the conclusion that this State’s counterterrorism preparation was grossly negligent.”

However he said that “there is some light beginning to shine” with Taoiseach Leo Varadkar’s pledge that within 50 days of coming into office he would establish a new Cabinet security committee similar to Cobra in the UK.

Prof Ben Tonra told the summer school Ireland has to start taking hard choices on European security instead of adopting a “smug” attitude to the issue.

“To my mind our commitment to European security is compromised and tentative. I don’t even know sometimes that we take it all that seriously – most especially in terms of money. Rhetoric on security comes easily. Resources? Not so much,” he added.

Prof Tonra said there appeared to be a “sure why would they attack us?” attitude to the threat “because Ireland is not a member of Nato, because Ireland is critical of Israel, because we’re small and/or ‘good guys’, the prospects of attack are limited”.