The former IRA man who became a peacemaker 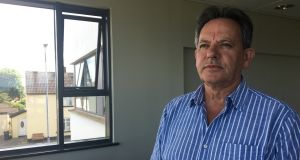 Seamas Heaney, a former member of the IRA who left the organisation and became a community worker in Creggan in Derry.

“People can say what they like about Martin McGuinness, but by God he reached out.”

It’s something Séamas Heaney has tried to do for more than 20 years.

Ahead of the second, permanent IRA ceasefire in 1997 – and its forerunner in 1994 – Heaney decided he had to make his voice heard.

A former member of the IRA who had left the organisation and become a community worker in Creggan in Derry, he had come to believe that “all violence does is create more violence”, and it was time not just for a ceasefire, but for the IRA to disarm.

It was a position many of his former comrades in the IRA found controversial – but equally he says there were those in the republican leadership who “wanted to take a chance and needed voices to come out and give them that support to go forward.

“I took that stance within myself and argued it at whatever opportunities I could.”

Like many young men in Derry in 1972, Bloody Sunday was a turning point for him.

“Up until then I was all for passive resistance and Bloody Sunday just changed all that, so I think at that stage myself and probably most people of my age group decided we’d had enough and violence was the only way things were going to change.”

Imprisoned the following year for causing an explosion, he decided not to re-join the IRA when he left prison.

That’s how he describes the death of his younger brother Denis, killed by an British undercover intelligence unit in Derry in 1978. The circumstances of the shooting are still contested – the army maintained he had been trying to hijack a car, but Heaney says his brother had effectively been living under a death threat after being arrested a few weeks earlier.

“They saw him in the street that particular afternoon and took him out.

“The impact of that on me individually and on my parents in particular was very traumatic. It just tore our world apart.

“After Denis it wouldn’t have been hard to go back to violence. I was deeply hurt and very angry, very dark.”

As part of his job as a community worker, Heaney saw first-hand the social and economic consequences of continued conflict in a deprived area like Creggan.

“I witnessed a change in mood within this community during the late 80s and early 90s whereby people were becoming disillusioned with violence. By about 1992 the dogs in the street knew the war was over.”

The 1993 Downing Street Declaration, which paved the way for the talks which led to the first IRA ceasefire the following year, was Heaney’s first opportunity to publicly argue for an end to violence.

In 1994, he presented a paper to Sinn Féin in which he said that at some point violence would have to end. He argued for a negotiated settlement with all those who had been engaged in violence, and said its underlying causes must be addressed.

“I gave it a lot of thought, and I talked to others, and I presented it at a time when it wasn’t really a popular thing to be saying. A lot of people were saying, ‘let’s go back to the war again.’”

When the 1994 ceasefire broke down, “there would have been a certain amount of ‘I told you so’”, Heaney remembers, but he says “at least the argument had moved to a different level and we were no longer sitting behind our various glass houses calling names at each other, there was engagement taking place.

“We couldn’t go on killing each other.”

By 1997, the failure of the previous ceasefire had left many people sceptical.

“I was of the view that it was right to go back into the talks. What else are you going to do if you don’t sit down and talk?

“I remember having conversations with Martin [McGuinness] during and after debates about it, and my position would have been that the IRA needed to gesture some kind of goodwill.

“The biggest gesture there was the act of decommissioning.

“Within the republican movement that was a very difficult subject, because in the building up of an arsenal a huge number of people took great risks, and all of those people potentially feel betrayed by the giving up of those weapons.

“I wouldn’t have been loved by the hawks, that’s for sure.”

While decommissioning did begin in 2001, Heaney believes that opportunities were missed immediately after the 1998 Belfast Agreement in terms of demilitarising the police and tackling what became dissident republicanism.

“The dissidents were not strong in the 18 months after the agreement,” he says.

“I think one of the things that happened is that when Sinn Féin moved in a political direction it left behind a lot of damaged people, and I think that left an awful lot of resentment in its wake.

“Unfortunately, that gave birth as well to the dissident IRA in its many factions, and I think there’s a responsibility with the republican community to take that on and address it and bring those people back into the debate at least.”

He also points to the lack of a truth-recovery process to deal with what has become termed the “legacy” of the Troubles.

“Atrocities happened here, on all sides, and I think in all of those instances someone should have been made to give an account of what happened.

“One of the things which I find really strange is the requirement for the IRA to disappear. How are you going to hold them to account then?

“Despite the fact that the IRA are no longer in existence as a military force I think that organisationally they need to be held to account for their actions.

“The UDA, the UVF, the INLA, the British army, the RUC – I’ve had conversations with members of all of those organisations over the years, and the issue is going to be who jumps first.

“The least likely to come forward is the British state and the British military, so it’s hard to see how that process can ever become real if the main player is saying no, we’re not going to engage.

“I’ve sat down with members of the PSNI whose relatives were members of the RUC who were blown up by an IRA bomb, and we’ve been able to sit and have conversations.

“When you get hit with tragedy it creates a shift in you.”

For Heaney, who is now the project director of a community health programme in Creggan, much of what was hoped for in 1997 has yet to emerge.

“People’s hopes and aspirations had to be realised, and despite the work that’s done in the community and voluntary sector in areas like Creggan every day I still see poverty etched in people’s faces.

“The opportunity for improved education, health, and jobs has not changed.

“Unfortunately, all the ingredients for unrest are there as a consequence of that, and I hope to God it never materialises.”