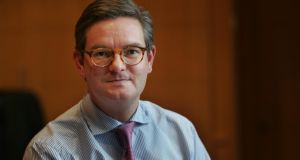 The terrorist threat in Europe presents a “grim threat picture” with the battlefield broadened to include thousands of “amateur wannabe terrorists”, the MacGill Summer School heard from former British ambassador in Dublin, Sir Julian King.

He said that beating the terrorists would require more than tightening borders, but tackling the root causes of radicalisation through supporting civil society projects on the ground and working with grassroots organisations.

Sir Julian, who is the EU’s security commissioner, said this “generation of jihadi terrorists seeks to destroy our values and our way of life”.

He also referred to how Moroccan-born Rachid Redouane, one of the three London Bridge attackers who killed eight people last month, was carrying an Irish identity card and had lived in Dublin for a period of time.

“Given the indiscriminate and unpredictable pattern of attacks, the challenge for our open, liberal democracies is to successfully counter a threat of this order without jeopardising our own hard-won values and way of life – which is, after all, what we are defending,” he said.

“What makes the current terrorist threat we are facing different is that it is global, linked to a transnational religious movement which, over a number of evolutions – from the Afghan rebels fighting the Soviets in Afghanistan through al-Qaeda and to Daesh, the so-called Islamic State of today – has broadened the battlefield to the extent that it can rely on a brand, a franchise and thousands of amateur wannabe terrorists,” he said.

He added: “The puppet-masters upload instructions to the internet to pick up a kitchen knife and get into a vehicle and suddenly terrorism is within the reach of anybody with a grudge, a violent temperament or in search of a cause to fill the existential void.”

Sir Julian said that counter-terrorism forces were squeezing the space in which terrorists – and the crime that supports them – operated. “We have strengthened our ability to control our external borders, and to exchange information between our law enforcement and security agencies.

“Another five terrorist plots have been foiled since March and 18 thwarted since 2013. And with another, fortunately failed, attack in Brussels it’s clear that the tempo of the threat is unprecedented. And we should always remember: Daesh don’t discriminate between different member states – the UK leaving the union will make no difference to Daesh’s murderous ambitions. “

Sir Julian said that last year there were 142 failed, foiled and completed terrorist attacks in the EU. “But Europe has actually faced periods of more frequent terrorism,” he added. “Between 1970 and 2015 more than 10,000 people were killed in more than 18,000 attacks and the deadliest of those were in the 1970s and 1980s. At its peak there were 10 attacks a week across Europe.”

Number of homeless people drops below 10,000 18:15
Election 2020 outtakes: Varadkar’s crafty cup switch 17:51
Tourists with plans to travel to China should be able to cancel at no cost 17:19
Mother of three McGinley children appears in court charged with their murder 17:08
Girl (7) settles case over alleged brain injury at birth for €5.8m 16:55
SUBSCRIBER ONLY