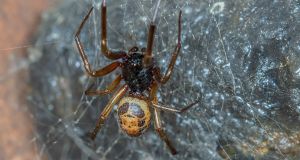 Transmission of infection to unwilling victims happens when its fangs are embedded in human skin.

This team of zoologists and microbiologists confirmed a theory debated among spider and healthcare specialists for many years, and explains a range of symptoms experienced by victims bitten by the invasive noble false widow spider in Ireland and Britain over the past decade. Symptoms include severe pain at the bite site, stiff limbs, redness and swelling.

The noble false widow was first spotted in Ireland in 1998 and has been multiplying in number since. It is found in 22 counties on the island but is most concentrated along the east coast.

Australian black widows or funnel web spiders are well known for their potentially deadly venom, but rare “skin-eating” conditions following seemingly harmless European and North American spider bites were thought to be the result of secondary infections caused by the victim scratching and probing the bite site with contaminated fingers.

This study published in Scientific Reports shows “not only do spiders carry harmful bacteria, but those germs can be transmitted when a spider uses its fangs to bite”. This infection route has also been found in other common spiders including the giant house spider.

Ironically, many spiders have been shown to have venom with antibacterial activity and it is often debated as to whether the venom would neutralise bacteria at the bite site – but this study also demonstrates, at least for the noble false widow, that the venom does not inhibit bacteria.

‘Some redness and pain’

Zoologist Dr John Dunbar at the Ryan Institute’s Venom System Lab said: “About 10 species of spiders common in north-western Europe have fangs strong enough to pierce human skin and deliver venom, but only one of them, the recent invasive noble false widow spider, is considered of medical importance. Most of the time, a spider bite results in some redness and pain.”

“In some cases, however, victims seem to develop long lasting infections for which strong antibiotic treatment – and sometimes a hospital stay – are necessary,” he added.

The massive rise in populations of false widow spiders in urbanised areas has coincided with a rise in bites with some victims showing severe symptoms caused by its venom, “but also infections, which in some cases proved even difficult to treat with antibiotics”, confirmed Dr Michel Dugon who is also based in the lab.

The most frequent circumstances of bites occur when people are sleeping or getting dressed in the morning when a spider is entangled in clothes, he added. The species, which originated in the Canary Islands, is believed to have first entered Ireland through fruit or exotic plants destined for garden centres.

PhD student Neyaz Kahn, a co-lead author, said: “The biggest threat is that some of these bacteria are multi-drug resistant, making them particularly difficult to treat with regular medicine. This is something that healthcare professionals should consider from now on.”

Dr Aoife Boyd, director of the pathogenic mechanisms group at NUIG, who also contributed to the research, said: “The diversity of microbes never ceases to amaze me. The power to survive and thrive in every environment is shown here by the presence of antimicrobial resistance bacteria even in spider venom.”

Antimicrobial resistance was an urgent and growing problem worldwide, she noted. “A ‘one health’ approach interconnecting human, animal and environmental health is the only way to tackle the problem,” she believed.