One in four people know of an autistic person among their friends, research reveals 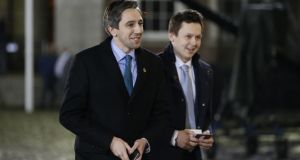 Minister for Health Simon Harris with brother Adam Harris of AsIAm who says ‘despite positive public sentiment, over 85 per cent of autistic people are under or unemployed’. File photograph: Nick Bradshaw

Irish people show strong positive support for autistic people in schools, employment and society generally but concede their level of knowledge of the condition is inadequate, according to new research.

Attitudes are most positive, and awareness highest, among younger people, the survey commissioned by autism advocacy group AsIAm indicates.

The research results, based on a survey of 1,000 adults, were published on Tuesday morning at an event to mark World Autism Day.

One in four people know of an autistic person among their friends, rising to one in three among under-25s, according to the research.

Half of those surveyed feel autistic people could work in a job like theirs - 23 per cent say they could not - with the highest scores recorded among younger people and those working in professional services, the public sector and wholesale.

“The critical finding is the gap between public support for inclusion and reality,” according to Adam Harris of AsIAm. “Despite positive public sentiment, over 85 per cent of autistic people are under or unemployed, autistic people are up to nine times more likely to die by suicide. Social isolation, particularly among autistic adults, remains a norm.”

Three in five respondents to the survey believe mainstream schools should be responsible for the education of autistic children, with only 12 per cent disagreeing.

Over 70 per cent of people think autistic people could get married and establish families, while almost 40 per cent think the media’s representation of people with the condition is not “authentic”.

Mr Harris, who is the younger brother of Minister for Health Simon Harris, says people’s attitudes are ahead of the Government’s efforts to include autistic people. “For over five years the Government have allowed successive autism bills and proposed strategies to languish on the floor of the Oireachtas whilst at the same time assuring the community of its support.”

He urged the Government to support a Sinn Féin private members motion to be debated in the Dáil on Tuesday evening, which calls for the creation of an all-party Oireachtas committee to deliver an autism strategy within six months.