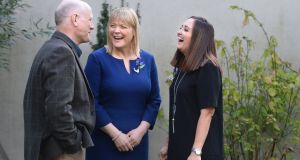 Almost 59 years ago, Mary Verbruggen received the gift of life from her mother and, less than two years ago, she received it again, from her brother Tom.

“I’m here to bear witness to the profound effect a donor can make to a life,” she says simply, at the launch of Organ Donor Awareness Week in Dublin’s Mansion House. “We need more of them.”

In October 2017, Mary, who is from Galway, received a kidney donated by her brother Tom, who is four years her junior.

She battled an aggressive form of type 1 diabetes for 42 years and had known for a long time that her kidneys were in trouble. Having eked years out of her failing organs, she learned from her doctors in 2016 the time had come for transplantation.

But there was a hitch, her blood type meant a wait of up to eight years for a suitable kidney from a deceased donor. In that time, she was likely to deteriorate severely and be very sick. Her doctors raised the issue of a living donor transplant. Her children, young adults by then, offered, but so did Tom.

“We watched our mother die of breast cancer at the age of 51 and we could do nothing, but this time there is hope and a chance,” Mary recalls her brother saying. “We have to take that chance.”

Both she and her brother passed the necessary health checks for their suitability for such arduous surgery, and she took her chance. She found herself thinking before the operation: “I’ve only less than a quarter of my life to live, so if something goes wrong, make it me to be the one to go.”

However, the operation went well, and her life was changed. “It made a tremendous difference. All the tiredness disappeared.”

Mary says the one person who often gets forgotten in discussions around transplantation is the spouse of the donor. “We couldn’t have done this without the support of Tom’s wife Aisling; she could have stopped it. But she never did, she gave me and my family huge support.”