Screening of homeless people finds a third have hepatitis C

Study says hospital based treatment not suitable for homeless sufferers 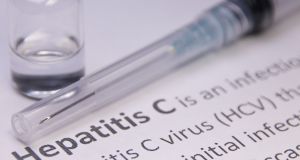 Hepatitis C is common among drug users and is often spread through the sharing of dirty needles.

A large-scale screening of Dublin homeless people for hepatitis C resulted in more than a third testing positive for the disease.

The HepCheck Dublin study, published in the medical journal BMC Infectious Diseases, is the first to specifically examine the prevalence of hepatitis C in the homeless population. It was part of a Europe-wide study of the disease in vulnerable populations.

Researchers tested 538 people and found 199 (37 per cent) tested positive for hepatitis C, a virus which can lead to fatal liver disease or liver cancer.

Among those who tested positive, 44 per cent, had previously been diagnosed with the disease while 56 per cent (112) were “new positives”.

Of those who tested positive and consented to further study, 78 per cent were currently living in hostels with the remainder sleeping rough or “couch-surfing”. Just under 70 per cent said they were in drug treatment.

Hepatitis C is common among drug users and is often spread through the sharing of dirty needles. The researchers almost half of those who tested positive reported sharing needles. More than half of those screened said they were intravenous drug users.

The study also found sufferers often did not receive treatment for the condition. Unstable housing situations, social stigma and imprisonment were all cited as barriers to treatment.

In Ireland, treatment for hepatitis C is only available in hospitals. The authors noted such treatment is not effective in meeting the needs of the homeless population.

“The current referral process exacerbates barriers to treatment engagement. Due to the transient nature of the cohort there are difficulties in contacting and sending reminders for appointments. To compound this further, not all participants had access to a key-worker to facilitate the referral process.”

They said the research shows the health service must proactively target homeless people for hepatitis C testing “particularly those who are actively using or have a history of injecting drugs.

“Marginalised injecting drug users, especially those who are without stable accommodation are a hard to reach group and are less likely to access health care due to fear of discrimination, stigma, low health literacy, and health professional misunderstanding of their needs.”

Many of the people tested by the researchers had complex health issues and suffered from depression, anxiety and forgetfulness, “all of which confound the treatment care pathway”.