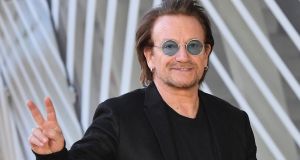 Bono felt a musical response by the band to Covid-19 was not the right response. ‘I just don’t think this is the moment for U2 to be doing a sort of Kumbaya thing. It just doesn’t feel right for me – it feels like a time for action rather than words,” he says. File photograph: Emmanuel Dunand/AFP/Getty Images

Ultimately, the band would chip in €10 million for personal protective equipment (PPE) for frontline medics in the fight against coronavirus.

“I explained to him that any role that people like him could play in it because of the way they connect people across the world would be a little part of the thread of the great story of how Ireland is responding,” says the Minister.

The band and its lead singer have ended up being just some of the players in a bigger public-private collaboration that culminated in a large consignment of medical supplies – sourced by the HSE, Irish diplomats and IDA officials in China, and private individuals and businesses – arriving at Dublin Airport on a privately funded flight from China on Tuesday.

These endeavours have since turned into a much broader collective effort involving members of the public.

The global pandemic has flipped the world on its head.

Bono was one of a number of people Donohoe called that weekend last month as the Government sought help in unusual quarters in these strange, unprecedented times.

Concerned at what the country was facing in a once-in-a-century health emergency, the Minister for Finance wanted to see how prominent people in Irish life, including business leaders, could help the country out in this time of need, economically or otherwise.

“I was pushing a door that was already wide open because he was already thinking about it and the role he could play.”

In their conversations, Bono felt that a predictable musical response was not the right one.

“I just don’t think this is the moment for U2 to be doing a sort of Kumbaya thing. It just doesn’t feel right for me – it feels like a time for action rather than words,” the singer told The Irish Times.

The Minister explained the challenges the State was facing, including the shortage of PPE.

“Proactively, off his own bat, he said he wanted to get involved in a very particular thing – he could find new ways of trying to source new PPE equipment for Ireland,” says Donohoe.

Connections were made with the HSE and Bono worked his well-worn contacts book.

Earlier this afternoon, our @Airbus #A330 landed @DublinAirport from Hong Kong full of @HSELive’s medical and #PPE equipment to help in the fight against #COVID19. Thanks to @HSELive @DublinAirport @IDAIreland @IrlEmbChina and @PCH_Intl for all their support! pic.twitter.com/JZFawwQpqF

He teamed up with businessman Liam Casey, founder of tech supply chain business PCH and a 24-year veteran of doing business in China – global centre of protective equipment manufacturing.

Bono contacted some of the world’s most powerful businessmen to see how they could help source medical supplies out of China. His calls included Chinese magnate Jack Ma of Alibaba, Tim Cook of iPhone maker Apple, Mark Benioff of US software giant Salesforce and Doug McMillon, chief executive of US retail giant Walmart.

Casey leaned on his corporate team in China to verify the quality of the PPE material they found: visiting factories, walking production lines and checking documentation and packaging

“We have got a couple of hundred people out there. It is easy: you get on a plane and go to the factory and see if is it real or is it fake, and a lot of them are fake,” says the businessman.

One of the Irish party involved in the push to buy the PPE likened the frenzy to buy it to the Pirates of the Caribbean and the “Wild East” where brokers and middlemen – rather than the Chinese government and manufacturers themselves – are pushing and price-gouging.

“The competition is fierce. There has never been anything like this from a trade point of view – never. This is completely unique,” says Casey.

For Irish buyers, it got down to brass tacks on price and the cent demanded for every medical-grade KN95 face mask; Casey bartered them down from 69 cent to 39 cent a face mask but he says it was because the products were of a high quality rather than the lowest price that mattered.

“If I am putting a product out, can you imagine that shipment if there was anything wrong with the quality? It would have been a disaster. We weren’t going to take a risk on that,” he says.

Bono’s profile and phoning from Dublin landed new suppliers, including this week a top executive at Chinese tech giant Tencent who was impressed that U2 was putting its money where Bono’s mouth was. Getting the company on board brought leverage and opened up supply lines for high-quality masks and other equipment, and conversations with business owners.

“The power of Bono on the ground – I was able to go to some of the bigger companies and that really opened the doors for us,” says Casey.

The singer is keen to stress his efforts pale by comparison to what others are facing at home.

Getting the PPE was one challenge, getting it back to Ireland and into Irish hospitals was another. Casey called Dómhnal Slattery, founder and chief executive of Dublin-based aircraft leasing company Avolon.

“I get a phone call from Liam: ‘I have a bunch of PPE in China and I have no way of getting it home – can you help?’” says the Clare man of the Cork man’s call.

Slattery found a free A330 airplane within Avolon’s fleet that could take almost 15 tonnes of PPE including masks, goggles, gloves, face protectors and 40 ventilators that the HSE had bought, some Avolon had sourced and the U2-Casey shipment.

Two flight crews and a standby crew were found for the 13-hour flight. It was a passenger aircraft so a million medical gloves were loaded into the overhead compartments above seats.

“It was nothing beyond the wit of man,” says Slattery.

The efforts are continuing. Avolon is chartering a Boeing 787, which is three times the cargo capacity of the first airplane, that will transport a further 70 tonnes of PPE supplies in next week or so. The company has opened up a crowd-fundraising drive seeking €350,000 to cover the cost of the flight; by Friday morning it had raised €160,000 including many small donations from across the country.

“If there is any shortfall here, we will pick it up but the collaborative national challenge is to try to get everyone to feel that they are involved. We have kids giving €20 into this thing,” he says.

Beyond their own private efforts to source PPE, Casey says he was amazed at the volumes the Irish Government has been able to source and ship from China – an order of €208 million, using its connections through Ireland’s Ambassador in Beijing, Eoin O’Leary, and IDA officials in the Far East – given the “intense” competition for the products. Even the HSE-bought equipment that turned out to be below medical-grade standard will find a use somewhere, he says.

“What we are doing is nothing in comparison to what the HSE has done, nothing. I have never seen anything like that. It is soft power as well as knowing what to do.”

Paschal Donohoe says this soft power flows from the “social capital” and the intangible Irish qualities that come from the country’s “size and intimacy” where, when institutions are under strain, people who are well connected with each other – outside of government – can come together.

“I believe that Ireland does have reserves of soft power but unlike in some other countries, that soft power can sometimes come together spontaneously and the locus of that soft power is not always government in Ireland,” he says.

“I just think it came together in this extraordinary story.”

Dómhnal Slattery says the speed and passion behind people’s efforts to help, from world-famous musicians to a teenager donating a fiver, is due to being able to see the immediate benefits of action.

“If I bring a million masks back from China, I know they are going straight into the Mater, James’s, Vincent’s and all over the country. It is very tangible,” he says. The outpouring of support from across the country has been “extraordinary”.

“It is like a war footing, it’s blitzkrieg. We have to make sure we come out the right end of it and it is a very cohesive, energising environment,” he says.

“When the Irish put their mind to it, we can make anything happen.”