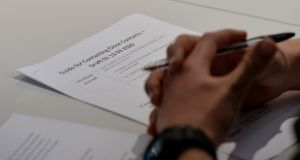 Contact tracing is a cornerstone of Ireland’s response to controlling the rise of Covid-19. Photograph: Alan Betson/The Irish Times

Technical issues delayed the rollout of contact tracing at one of the country’s nine tracing centres, with more than 100 contact tracers unable to start work until Tuesday – 11 days after the intended start date.

The tracing centre, which was originally to have been located in Limerick but is now being managed virtually, had been due to come on-stream on Friday, March 27th, according to emails sent to contact tracers and seen by The Irish Times.

However, there were multiple delays to the process, with organisers at the tracing centre blaming technical faults and other issues for the hold-ups.

On the morning of March 27th, contact tracers were emailed by organisers to say that “at very short notice . . . today’s session at the Revenue office in Sarsfield House for contact tracing is cancelled. This is due to a technical issue with the HSE trying to get all the computers, hardware, software, etc, ready for the volunteers”.

Tracing was rescheduled to begin on Monday, March 30th, but again those assigned to the centre were emailed to push that date back to Wednesday, April 1st. “Unfortunately, it is taking some time to get computer systems and software in place, as this hub is being set up very quickly,” organisers wrote.

When the Government introduced stricter restrictions on movement on March 27th, the tracing centre was forced to implement a remote working model. Again, those assigned to the centre, a mixture of Revenue staff and volunteers from the healthcare disciplines at University of Limerick, were told that this change “inevitably will affect our anticipated start date”.

At this point, no new start date was given, and those assigned to the centre were told they would be “updated a day or two before any anticipated start dates as things are very changeable at the moment”.

On March 31st, contact tracers were advised the HSE was “currently trying to get logons for the Covid-19 contact tracing system out to all of the volunteers and, unfortunately, there is some hold-up in doing this within the HSE”.

On April 1st, tracers were advised that HSE logins had been sent to them, but some were not received until April 3rd. Full contact tracing was initiated at the centre only on Tuesday of this week.

In response to queries on delays, the HSE said it had established a programme of non-public health staff acting as contact tracers to support the public health response and free up HSE staff to focus on urgent tasks, such as working on clusters in nursing homes.

“As with any programme of this scale and complexity, there have been a number of challenges in the contact tracing centres. However, with our dedicated team of mobilisers we have worked these matters through as they arose,” a spokesman said.

Contact tracing, which involves tracing individuals who had been in close contact with confirmed cases, and advising them to self-isolate, is a cornerstone of Ireland’s response to controlling the rise of Covid-19. However, there is concern that tracing delays are limiting the efficiency of the process.

In some instances, sources have reported informing people of a positive result three weeks after a swab was taken. In one instance, an individual had returned to work, mistakenly thinking they could do so after two weeks, even if they had mild symptoms, which they did. There have also been reports of GPs contacting patients who they assumed had been told of their positive status by contact tracers, only to discover they were unaware.

Fianna Fáil health spokesman Stephen Donnelly said that while progress had been made, the delays were among “a growing number of incidents that suggest things are not going as smoothly as the caretaker Government is saying”.

He said he was aware of a woman in her 60s who waited 22 days for a positive result, while her husband, in his 70s, was still waiting.