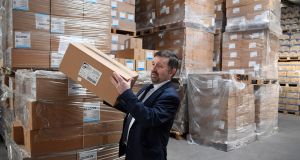 This brings the number of Covid-19 fatalities in the North to 70.

The number of confirmed coronavirus cases in Northern Ireland is now 1,158 with 8,740 people tested for the virus.

Meanwhile, the Ulster Unionist Party leader Steve Aiken has condemned a social media attack on the UUP Minister of Health Robin Swann which has led to the arrest of a man in Co Antrim.

Police said on Monday they were investigating after “threatening and offensive comments” were made on a social media platform on Friday.

“A 26-year-old man was arrested in the Ballymena area on Sunday on suspicion of improper use of telecommunications causing anxiety and subsequently released on police bail pending further enquiries,” the PSNI confirmed.

UUP leader Mr Aiken said the arrest was in connection with a threatening social media message aimed at Mr Swann and his family over his handling of the coronavirus crisis.

He said that the attack also was “blatantly sectarian” in nature because the person responsible also said he would “hunt” down Mr Swann and “make sure you and your family suffer” it also stated it was “time you British b******s left Ireland”.

Mr Aiken condemned the attack on a politician “who was doing his best for Northern Ireland, who is trying to make sure that we are ready for the biggest crisis we have faced in over a hundred years”.

He added it was important that Mr Swann should feel secure “because he is doing a successful job as are many other people across the health service” and other essential services.

“This is an absolutely disgusting attack on somebody who is doing their very best for everybody in Northern Ireland,” he told BBC Radio Ulster’s Nolan Show.

The Department of Health in a statement confirmed that a threatening communication was received by the Minister via social media. “This matter has been passed to the police. The department will not be making any further comment,” said a spokesman.

The SDLP leader Colum Eastwood in condemning the abuse said, “Robin Swann is working night and day to reduce the impact of coronavirus on our communities. The vile sectarian abuse and threats that he and his family have been subjected to are disgusting and those responsible must be held accountable.

“On behalf of the SDLP, I want to express our solidarity with Robin and his family.”

Meanwhile, the Northern Secretary Brandon Lewis told the BBC that he understands that a shipment of five million pieces of personal protection equipment has been delivered by the British government to Northern Ireland.

Mr Lewis said it was due to arrive at around 7am on Monday and was to be delivered to the health service in the course of the day.