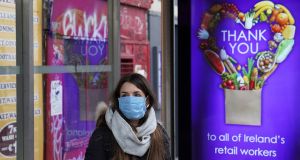 A woman wearing a mask at a bus stop in Dublin which displays a message “Thank you to all of Ireland’s retail workers.” Photograph: Reuters/Clodagh Kilcoyne

Extra checks on citizens returning to Ireland from abroad are under consideration by senior officials in the Department of Health to deal with the coronavirus crisis.

Taoiseach Leo Varadkar said that while Ireland would not be closing its borders, the National Public Health Emergency Team was considering further restrictions on inward-bound travellers.

A senior source said that the new restrictions could involve increased oversight and communication with individuals who have returned from overseas. “It might just be checking in on people to make sure they self-quarantine,” they said.

However, it could also involve additional checks at airports, and would need the assistance of staff who are still currently working at airport terminals, sources said.

Speaking on Monday, Mr Varadkar said the matter was under consideration.

“We’re not going to close our borders. We need to enable our citizens to come home. They might be family or friends. They might also be healthcare workers who volunteered to come back and work in the health service,” Mr Varadkar said.

“We need to import things like PPE from China. We need to be able to export medicines to other parts of the world.

“But the National Public Health Emergency Team last week and this week will examine whether there are additional restrictions or controls that we could apply to people coming into the country that would reduce the risk of imported cases of coronavirus, resulting in community transmission here.

“That is being examined at the moment, and we should be able to do something in the next couple of days.”

Restrictive Government measures are having an “enormous effect” in reducing the number of new cases of coronavirus, according to the academic tasked with predicting the further growth of the epidemic.

The measures such as closing schools, colleges and most workplaces have resulted in a “huge” fall in the growth rate of the outbreak but it will take from seven to 14 days before the full impact of the measures will be known,  Prof Philip Nolan, president of NUI Maynooth, said on Monday evening.

Meanwhile, Northern Ireland public health specialist Dr Gabriel Scally, who was the author of a report on the CervicalCheck screening controversy, has warned that Ireland’s geographical advantage is being “squandered” by differing approaches to the public health crisis North and South.

“Historically islands have advantages when dealing with epidemics. For example, avoiding importation of new cases by controlling movement to and from the island is comparatively simple.

“However, in this coronavirus pandemic Ireland’s geographical advantage is being squandered by the adoption of very different approaches to dealing with the disease.

“The advice to someone in Lifford [Co Donegal] with symptoms of the disease is to self-isolate for a minimum of 14 days – a stone’s throw away in Strabane [Co Tyrone] the advice is isolation for seven days.”