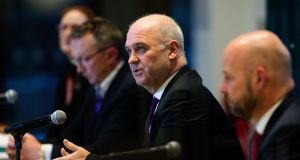 The patients included five women and three men; they had a median age of 86.

Six of the eight patients had underlying conditions.

The number of newly confirmed cases was 295.

There are now 2,910 cases of coronavirus in the Republic, and a total of 54 deaths.

An analysis of cases up to last Saturday show almost as many women as men are affected by the virus (49 per cent of cases against 50 per cent). There are 111 clusters involving 428 cases.

The median age of confirmed cases is 47 years.

One in four cases have required hospitalisation, while 84 of the 2,475 cases under analysis were admitted to ICU.

Chief medical officer Dr Tony Holohan said: “We are beginning to see encouraging signs in our efforts to flatten the curve. However, we cannot become complacent as we are still seeing new cases and more ICU admissions every day”.

Dr Holohan said the measures introduced enjoy widespread public acceptance, with 89 per cent of people surveyed say they were happy with the measures and 94 per cent expressing confidence they would be able to adhere with them.

Prof Philip Nolan, chair of a group carrying out epidemiological modelling for NPHET said Ireland was “not on the track” of an unmitigated epidemic.

“The model reveals that before restrictions were in place, daily growth rate of confirmed cases was at 33 per cent. This has fallen in recent days to around 15 per cent. But it is still growing and needs to fall further.”

Previous estimates of 15,000 people being infected by the end of this month were based on what an “unmitigated epidemic” would look like, according to Prof Nolan, absent the measures introduced by Government.

“It takes time to see the impact of our efforts in the numbers. It will be another 7-10 days before we have a reliable picture of how effective our collective efforts have been.”

Officials again acknowledged there are delays in the time it take to test people, and for samples to be processed, but they were unable to say how long the backlog was, and whether large test centres which closed over equipment shortages would re-open.

HSE chief clinical officer Dr Colm Henry said shortage of testing kit stock had led to delays but this was being replenished on Monday . There was a lot of global competition for the reagent used in tests but the HSE was pursuing a number of supply options.

Asked whether any samples had expired due to the delays, Dr Henry said he was not aware of any expired tests at this stage.