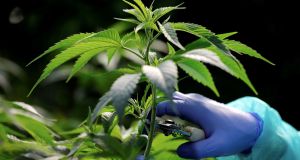 Ireland is “sleepwalking” into the legalisation of cannabis on the back of a campaign of misinformation about the drug, according to doctors who have set up a new group to campaign against liberalisation.

The initial 20 members of the Cannabis Risk Alliance include the head of the College of Psychiatrists, Dr John Hillery, and former president of the Irish Medical Organisation Dr Ray Walley.

Criticising the “one-sided debate” on cannabis, the doctors say society has “taken its eye off the ball” in relation to the harmful effects of the drug.

In their practice, they say they are treating ever-growing numbers of patients suffering a range of side effects from abusing the drug.

Suicides, epileptic seizures, psychosis and “wasted lives” are some of the cannabis-related complications Dr Walley, a GP in Dublin’s north inner city, says he comes across.

“I’m concerned about the dishonest debate out there. Society, politics, the medical fraternity, too – we’re sleepwalking into this. The only place you read about cannabis now is in the business sections,” he says.

The growing commercial interests behind cannabis internationally are “hijacking the truth” about the drug in the same way the cigarette industry did about its products in the mid-20th century, he says.

In a letter sent to the Irish Times, the group is critical of the “blurred boundaries” between debates on decriminalisation and legalisation of cannabis, and medicinal cannabis.

The Government said last year it was considering decriminalising possession of small quantities of cannabis and other drugs. Three countries, and many US states, have gone further and legalised it.

“Decriminalisation and ‘medicinal cannabis’ campaigns have proved to be effective Trojan horse strategies on the road to full legalisation and commercialisation elsewhere,” the doctors say in a letter published in The Irish Times today.

“These campaigns have convinced people we have a policy problem, not a drug problem,” says Dr Bobby Smyth, a child psychiatrist and addiction specialist who points to a 200 per cent increase in cannabis dependence among young people in the last decade.

Young people’s dependence on the drug has changed over this period as potency has increased: “Patients are now consumed from morning to night with obsessing how to get their drugs. It’s a seven-day thing”.

The doctors accept there is “limited evidence” some products using cannabinoids have medical benefits for “a very small number of conditions” but say this has been “grossly distorted” to imply the entire plant can be considered a medicine.

Minister for Health Simon Harris is expected to bring proposals to regulate medicinal cannabis to Cabinet before the summer. Irish patients already have limited access to it for some conditions but have to source the product abroad; an Irish supplier is expected to be available shortly.

The debate about medicinal cannabis has changed the attitude of politicians to the drug in recent years, according to psychiatrist Prof Mary Cannon. She claims the “cannabis agenda” is being actively “pushed” within Government.

The group says it hopes to recruit other doctors, lobby Ministers and make a presentation to the Oireachtas health committee.