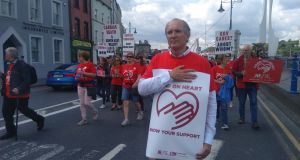 Thousands of people took the streets of Waterford city on Saturday in the latest protest calling for a call for a 24/7 cardiology service at University Hospital Waterford (UWH).

Organisers told the crowd to “fight against traditional loyalties” when they go to the ballot box next Friday in the local and European elections.

The protest centred around the lack of interventional care at UHW, where a permanent catheterisation lab operates from 9am to 5pm Monday to Friday. A temporary cath lab at the hospital offers a diagnostic service but cannot treat patients.

It makes Waterford the only nationally designated cardiac centre that does not operate around the clock.

Protesters marched from Ballybricken down the city’s quay before coming to a stop outside the Bishop’s Palace for speeches by family members of people who have suffered heart attacks and also health campaigners.

Eva Creely, whose sister Una McDermott last year suffered three heart attacks and had to wait 19 hours before UHW’s cath lab could reopen, incurring significant brain damage and dying three weeks later, was among those who addressed the crowd.

Ms Creely said that any political party candidates going for election next Friday would need to “take the message back to any of their parties that the people of the southeast are due this [24/7 cardiac care]”.

Noting the ongoing controversy concerning the hospital’s mortuary, where consultants have claimed that the facilities are so outdated that bodies have been stored on the floor and have decomposed as as result, Ms Creely said it hurt to hear that her sister “was brought to rest in a place that wasn’t fit for purpose”.

Several demonstrators said the issue would be in their mind when voting next Friday.

“It’s very frustrating,” said city woman Lorna Long. “I mean, at the end of the day it’s in Dublin, it’s in Galway, it’s in Cork, it’s in Limerick. Why not the South East?”

Brendan Deasy, also from the city, said he was unhappy with both Fine Gael and Fianna Fáil. He believed the latter could refuse to support Fine Gael in the confidence and supply agreement as a way of delivering the expanded operating hours.

He said Fianna Fáil local representatives had told him that making cardiac care a red-line issue would mean “pulling the plug on every small little thing”.

“This is not a small little thing. It’s a big thing,” he added.

The march saw a turnout from across the political spectrum, as well as a Wexford contingent including Labour Party leader Brendan Howlin and Ireland South candidate for the European elections, Mick Wallace.

A national review of cardiology services is due to be published in the coming months.

Minister for Health Simon Harris said before Christmas that almost all staff were in place to expand the lab’s operating hours to an 8am to 8pm weekday service.

However, a spokesperson for the South and South West Hospital Group told the Irish Times at the weekend that not all staff were in place to yet expand the current service.

The recruitment of the cardiologist for the extra hours was currently being processed, the group said.

3:45 Covid-19: Number of clusters rises by a third in second week of year