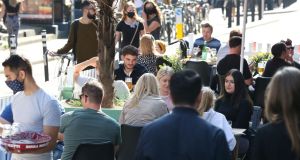 Prof Philip Nolan has said there was “lots of international evidence” for the role of restaurants and bars in driving community transmission of Covid-19. File photograph: Sasko Lazarov/RollingNews.ie

The assertion by a senior National Public Health Emergency Team (NPHET) official last Friday that restaurants were a principal driver of transmission of Covid-19 came as a surprise to many, not least the Dublin cafe-owners who had to shut down their businesses hours later under the latest round of restrictions in the capital.

But the claim by Prof Philip Nolan that public health doctors “don’t need to know” where a person got the virus also raised worrying questions about our contact tracing system which, with testing, is supposed to be the main weapon we have in this pandemic.

“We would like to go back and find out where people are getting the virus, but we don’t have the time or resources to pursue this academic exercise,” Prof Nolan tweeted.

For months, public health officials have, without any qualifiers, published figures showing a low number of outbreaks in restaurants. But Prof Nolan abruptly changed this narrative by saying there was “lots of international evidence” for the role of restaurants and bars in driving community transmission.

Later, he clarified his remarks by saying public health doctors “would track down the source if they had the resources to do so, but they don’t”.

This amounts to the same thing; either we aren’t interested in, or haven’t the time/money/staff to investigate the ultimate source of outbreaks.

In fact, public health doctors do engage in source case investigation, but contact tracing teams who handle community cases do not.

It is perhaps understandable that in the white heat of a pandemic, the immediate takes precedence over the important. The importance of tracing contacts and encouraging them to self-isolate, and thereby remove the risk of onward transmission, is considerable.

Contact tracing involves a particular skill-set that is adept at engaging with people and reassuring them about doing what is best for themselves and the community, infectious diseases expert Prof Mary Horgan points out.

“Along with lab scientists, contact tracers are the unsung heroes of this pandemic,” said Prof Horgan, who is president of the Royal College of Physicians of Ireland.

We have, however, been through several stages of this pandemic by now, including a prolonged lull over the summer. There has been time to put the system on a more permanent footing, and for it to be more ambitious in its scope.

“The system has to be capable of experimentation,” Prof Horgan said. “We need to get forensic in at least some areas, to dig down into the information and establish trends, from which we can extrapolate.”

That information is a valuable resource that can tell us a lot about people’s behaviour, where the virus is transmitting successfully and how people are adhering to the guidelines in place, according to Prof Horgan.

The HSE says that while contact tracing does include questions to all identified cases on the source of infection, “consideration is now being given to how these processes can be further enhanced”.

In prospective tracing, the close contacts of a Covid-19 case are monitored so they can be quarantined if they show symptoms. But Japan also tried to find out where they were infected and then monitored people who visited that site. The aim was to catch the one in five cases who turn out to be super-spreaders.

“Contact tracers have to collect information over a long period of time, roughly the two weeks the virus spends incubating. They also have to get every bit of relevant information,” Mr Higgins, of Carraighill consultants, said.

“Details about cases, by Eircode location, could be uploaded onto a database, and a search could throw up matches by location and other criteria.”

The resulting information could help provide real-time clues about locations where the virus was spreading and, more broadly, point to general settings which are conducive to its transmission.

Given that NPHET was making “life and death” decisions for businesses, it should be given the resources to ensure these were well informed, he said. “We’ll end up saving money in the long run.”

Yet it may be too late for now to widen the scope of contact tracing. The World Health Organisation says contact tracing can be “difficult” when transmission of the virus is “intense” but should be carried out “as much as possible”. For the coming weeks, fire-fighting is likely to dominate over disease detection.