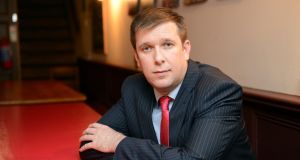 Adrian Cummins, chief executive of the representative body for restaurants, said that the National Public Health Emergency Team had made reference to international evidence as one of the reasons for closing indoor dining for until October 10th. Photograph: Eric Luke

The Restaurants Association of Ireland has called on the Government to publish the international evidence relied on by the Cabinet to support the decision to ban indoor dining in restaurants, cafes and food-serving pubs in Dublin.

The restrictions on indoor dining were imposed in Dublin last week as an additional restriction on top of the Level 3 measures under the Government’s new five-level alert system in an attempt to suppress the rising number of Covid-19 infections in the capital.

Adrian Cummins, chief executive of the representative body for restaurants, said that the National Public Health Emergency Team had made reference to international evidence as one of the reasons for closing indoor dining for until October 10th.

“Business owners want to see it. An industry has been closed down. This is about maintaining confidence in the strategy and where we are going to,” he said.

Mr Cummins called on the Government to “fix” the contact tracing data in order to give confidence to businesses and employees across the country.

Restaurants had followed guidance on contact tracing yet were told by NPHET expert Prof Philip Nolan that infected people are only asked about contacts for 48 hours before symptoms and it is not checked where they might caught the virus before that, he said.

Mr Cummins said that Prof Nolan mentioned in a series of tweets last Friday that the virus spreading was in gyms, but gyms have remained open under Level 3.

“If we want to bring everyone along on the same page and keep the morale of the people up, you obviously want to trust that this is the right thing to do. We need the evidence to back it up and the proper data,” he said.

Prof Nolan has said that there has been a “misreading and misinterpreting” on the data on outbreaks and clusters and that the high level of community spread of the virus in Dublin meant there was a need for additional restrictions to reduce social contacts between people.

There were 50,000 out of work because of the latest restrictions on the hospitality sector, said Mr Cummins, and some businesses were fearful that they may not survive the three-week period during which they cannot serve customers indoors.