‘I asked them was I going to die?’ – Covid-19 survivor on the mental impact 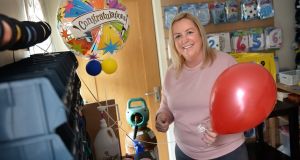 Sara-Ann Simpson in her workshop at home where she runs her events business. The mother of four spent five days on a ventilator in Beaumont Hospital. Photograph: Dara Mac Donaill

The sound of beeps bring Sara-Ann Simpson right back to the ward in Beaumont Hospital.

“I can still hear them, the beep, beep, beep,” she said, recalling the constant noise of the machines surrounding a woman who was seriously ill with coronavirus on her ward.

The sound transports Ms Simpson (47) back to a time when she almost lost her life to the disease.

After five days on a ventilator in the Dublin hospital’s ICU in April, the Santry woman is one of the 450 people who were admitted to an Irish ICU with the virus, a survivor behind the statistic.

More than 3,400 people have been hospitalised with the disease during the pandemic.

“When I say I hear the beeps, it is every now and again, and it might not be the same beep. Then all of sudden, I can hear the other beep. It would bring it back up,” she said.

One Thursday in April, she started feeling unwell. By the following Thursday she was “gasping for breath” and was brought by her husband to Beaumont. She was relying on large quantities of oxygen to breathe on her own but that did not work. She told her she would be intubated.

“They said, we are after speaking with your husband and we have made a decision – we are going to act now as opposed to an emergency and we are going to put you to sleep,” she said.

“I asked them was I going to die? One nurse said: ‘You will be fine,’ and then another nurse actually said: ‘Look, we don’t know. This isn’t your typical event,’” she recalled.

She was asked would she like to call her family. The conversations were “horrendous”, she said, becoming emotional as she remembered her 16-year-old son crying on the call.

“You did feel it was your last goodbye, even though the staff were lovely and reassuring and saying: ‘Look, if we intervene now, we feel you will have a chance.’ They wheel you down to intensive care and everything is going through your mind,” said the mother of four.

“It was quite a daunting experience. Speaking to my children, they did think that that was the last conversation.”

Now, five months on, Ms Simpson is back at work, running her events business from home. She lost power in the grip in her left hand from being in a prone position in the ICU and was unable to lift up a helium canister she uses for balloons in her business. She can also become short of breath very quickly.

She believes her recovery will take time but that others may likely experience longer-term effects beyond their physical recovery.

“I would be quite a strong person and I would imagine that for anyone who was fragile in the mind would struggle so much,” she said.

This week, at the Health Service Executive’s weekly briefing, Anne O’Connor, the HSE’s chief operations officer, spoke about how the psychological impact on people who had been seriously ill with the virus would “require attention post-Covid”.

Dr Colm Henry, the HSE’s chief clinical officer, said that 79 per cent of people admitted to ICUs with the virus had survived.

Post-coronavirus clinics in hospitals had also found patients discharged from ICU had gone on to experience severe respiratory after-effects such as excessive clotting in the lungs as well as fatigue, muscle fatigue and a protracted period before people could return to work, he said.

A recent report by doctors at Beaumont found that almost half of patients who were hospitalised with the virus will require “medium- to long-term specialist follow-up” and that “significant physical, psychological and cognitive impairments may persist despite clinical resolution of the infection”.

The report states that ICU admission is associated with particularly high rates of mental health complications as between 33 per cent and 75 per cent of critical care survivors have “clinically significant psychiatric or cognitive difficulties” one year after their stay in ICUs.

“Rates are likely to be even higher for those who experienced Covid-19 due to the particular stressors associated with this condition,” the Beaumont consultants say in the report.

“This will result in a significant need for integrated psychosocial assessment and follow-up care for patients discharged from critical care settings.”

The same experience is found elsewhere in the country.

Dr Corinna Sadlier, an infectious diseases consultant at Cork University Hospital, which also runs a post-coronavirus clinic to assist survivors of the disease in their recovery, said that the mental health fallout among formerly hospitalised coronavirus patients has been significant.

Anxiety levels has left some people who have not had mental health issues previously requiring medication. The uncertainty around their admission to hospital in the early stages of the pandemic and their isolation in hospital and subsequently at home was very distressing, she said.

“Some people were quite emotional coming back into hospital because it was their first time back,” she said.

“There was a huge amount of fear and uncertainty in the early wave and a lot of patients got home and recovered extremely well but coming back to the hospital brought it all back for them.”

On a recent visit to Beaumont’s post-coronavirus clinic, Ms Simpson heard a voice that she recognised belonged to a physio who treated her during her in hospital behind a mask.

“Them little things would bring it all back. It did stop me in my tracks. It did bring me back,” she said.

Recovering fully from the virus, she feels, will be a long process.

“Physically, I will get over it, but mentally it would actually take me a long, long time to get over it,” she said.

1 US presidential debate: who won, was it any good, were there any surprises?
2 Man unidentified in psychiatric hospital for 30 years may have DNA taken
3 Miriam Lord: Another dog’s dinner as D’Arcy jumps on the gravy train
4 US election: Joe Biden and Donald Trump clash in chaotic presidential debate
5 ‘Insane’ gathering of hundreds of students in Galway condemned
Real news has value SUBSCRIBE