Trump denies lying to American public about threat of coronavirus 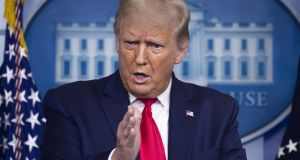 US president Donald Trump speaks during a news conference at the White House in Washington, DC, on Thursday. Photograph: Michael Reynolds/EPA/Bloomberg

US president Donald Trump rejected claims he lied to the American people about the threat of coronavirus, as the fallout from his comments to veteran journalist Bob Woodward reverberated on Thursday.

Several interviews between the president and Mr Woodward for the latter’s new book make it appear as if Mr Trump deliberately played down the seriousness of the novel coronavirus, describing the virus as “deadly” to Mr Woodward in the spring at the same time as he was assuring the American public that there was no threat.

“I didn’t lie. We have to be calm, we can’t be panicked,” the president said in a press conference at the White House on Thursday shortly before he left for a campaign event in Michigan.

When it was pointed out to the president that other leaders such as German chancellor Angela Merkel had remained calm but also had warned their citizens about the dangers of coronavirus, Mr Trump replied that Europe was “having breakouts like you’ve never seen before. We have done much, much better than the European Union, ” he said.

He repeatedly appeared to pass the buck to Mr Woodward, the journalist who broke the Watergate scandal in the 1970s. “If Bob Woodward thought what I said was bad, well then he should have immediately gone out to the authorities . . . but he didn’t think it was bad,” he said, pointing out that Mr Woodward had had the comments for months. “The only people who think it was bad is the fake news media.”

In a press conference that at times resembled a campaign event, Mr Trump defended his handling of the Covid-19 pandemic, attacking his opponent in the November presidential election, Democrat Joe Biden.

“If he had been in charge of this very serious, highly, highly contagious pandemic – the China virus – countless more Americans would have died,” he said, accusing Democrats of wanting to impose “an unscientific blanket lockdown”.

Describing what he said was Mr Biden’s “failed approach to the swine flu” while he served as vice-president in the Obama administration, Mr Trump claimed that his opponent “lacks the character, intelligence or instinct to do what is right”.

He again underlined his decision to impose a travel ban on China in the early days of the pandemic, stating that the US has “rounded a corner” in terms of coronavirus.

“We’re going to get through this, and right now we’re rounding the final turn. A lot of good things are happening with vaccines and therapeutics.”

The president was speaking as the Biden campaign launched a new digital ad attacking Mr Trump’s public attempts to play down the seriousness of coronavirus, drawing from audio recordings of his conversations with Mr Woodward.

Earlier in the day, at her weekly press conference in the US Capitol, House speaker Nancy Pelosi accused the president of showing “contempt” for the American people in his comments to Mr Woodward, which were recorded on tape.

“What the president did . . . in those comments showed his contempt – contempt for the American people and their health, contempt for science, contempt for any real effort to crush the virus, contempt for his supporters, their children, their parents,” she said. “He hid the facts and refused to take the threat seriously, leaving the entire country exposed and unprepared.”

Meanwhile, as the US House of Representatives prepared to return to Washington, DC, after the summer break, the Senate failed to pass a new coronavirus stimulus package. Dubbed the “skinny” Bill, the $500 billion Bill was blocked by Democrats in the Senate who deemed it insufficient.