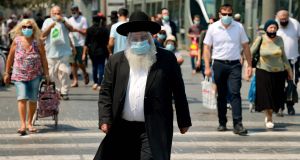 Israel imposed new restrictions on parts of the country to confront a resurgence of Covid-19 infections. Photograph: Emmanuel Dunand/AFP

With Covid-19 infection rates continuing to rise, Israel has decided to impose a nationwide lockdown, beginning next week on the eve of the Jewish New Year.

In the first two-week phase, people will not be permitted to go further than 500 metres from their homes and only essential workplaces, supermarkets and pharmacies will be open. Schools will be closed and restaurants will only be able to sell takeaway orders. Prayer will be permitted in public areas.

In the second stage, there will be a partial lockdown and schools will remain closed. In the third stage, a “traffic light” plan will be implemented, focusing on the so-called red zones where infection rates are highest.

The cabinet will convene on Sunday to finalise the dates for the three stages.

Implementation is likely to be delayed until next Friday in order to allow prime minister Binyamin Netanyahu to return from Washington where he will be attending a White House ceremony marking the normalisation of ties between Israel and the United Arab Emirates.

The lockdown comes exactly six months after similar measures were introduced to tackle the initial outbreak of the pandemic. Those measures succeeded in significantly reducing infections but in the second wave in the summer infections soared, particularly amongst the Arab and ultra-Orthodox communities, and health officials warned that hospitals are close to being overwhelmed.

Israel now has the highest level of Covid-19 infections per capita worldwide.

Earlier this week Mr Netanyahu backed down from plans to introduce a lockdown after opposition from his ultra-Orthodox coalition partners, instead opting for night-time curfews in more than 40 red zone areas.

“Netanyahu has a commendable record of folding magnificently but this time it concerned life and death,” wrote Yossi Verter, a political commentator in the left-wing daily newspaper Haaretz. “Because of petty politics Israel may experience disproportionate collective punishment.”

Opposition leader Yair Lapid said the lockdown was an admission of the government’s failure. “They’ll have a three-week lockdown, and then what? Do they have a healthcare plan? Do they have an economic plan? Have they set up an epidemiological testing system? Nothing. We’re headed for a lockdown because they failed, and they have no idea what they want to do now.”

The lockdown will come at a heavy economic cost, especially for businesses that were slowly recovering from the previous lockdown of March-April, particularly retail, tourism, and hospitality.

Top business leaders warned that a new lockdown would be disastrous to the economy and many businesses threatened to defy closure orders and open up anyway.

In a letter to Mr Netanyahu they warned that the restrictions would cause further unemployment and bring about an “economic coronavirus” that will be felt for decades.