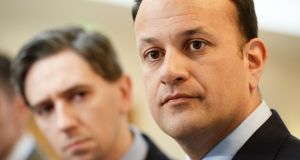 Taoiseach Leo Varadkar is due to make a formal State apology on Tuesday to women and their families who have been affected by the controversy over cervical smear test results. Photograph: Cyril Byrne/The Irish Times.

Taoiseach Leo Varadkar is due to make a formal State apology on Tuesday to women and their families who have been affected by the controversy over cervical smear test results.

Hundreds of women with cervical cancer were not told for years of an audit which showed they had received incorrect smear test results.

The Taoiseach pledged last summer to make an apology after he met members of the 221-plus support group, which represents women and families affected.

Government sources confirmed that Mr Varadkar was due to issue the apology early this week, but declined to comment further. However, he is expected to say the State should have informed women that they had been given incorrect all-clear test results before they were diagnosed with cancer.

Mr Varadkar is also expected to accept the findings of independent reports into the controversy, which found that tests were being outsourced to more laboratories than was previously known.

In all, more than 221 women were affected by the CervicalCheck controversy. The women involved had developed cervical cancer, after which an audit of their earlier tests was carried out. This audit revealed “discordant” results but most of the women were not told of them.

Members of the 221-plus support group are expected to be present in the Dáil gallery for the apology.

They are likely to include Vicky Phelan, whose court case first exposed how the misreading of smear test results in labs meant many Irish women received incorrect diagnoses.

Stephen Teap, whose wife Irene was diagnosed with cancer in 2015 after receive two all-clear test results in 2010 and 2013. She died in 2017 about the incorrect results.

Earlier this year the Government approved ex-gratia payments of €20,000 each for at least 120 women who were not told of an audit of their smear tests under the CervicalCheck programme. The payments were in line with the recommendation of an independent panel.

The Government has also pledged to enshrine a mandatory open disclosure policy for the health service. A Patient Safety Bill will provide for the option not to disclose an error or mishap to a patient – to be exercised only in a very limited number of circumstances.

It is also due to provide for a statutory duty of candour on individual healthcare professionals and on the organisations for which they work.

Open disclosure is a consistent a policy of communicating with patients when things go wrong in their healthcare by expressing regret, providing feedback on investigations into the matter and keeping those affected informed of what is happening to ensure the problem is not repeated.

The CervicalCheck controversy occurred despite the HSE having open disclosure policies in place since 2013.

According to the 2013 policy: “It remains the policy of the HSE that patients who experience harm as a result of their health care are communicated with in an open, honest, empathic and timely manner and that an apology which is sincere and meaningful is provided.” The HSE website notes this policy is “under revision by the HSE”.

In a report last year, Dr Gabriel Scally, a UK public health doctor, described the current open disclosure policy in the health service as deeply contradictory and unsatisfactory because it does not compel clinicians to disclose failings in the care of patients.