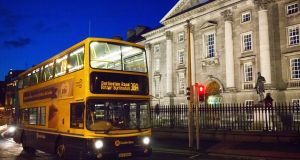 Minister for Culture Catherine Martin said issues such as the expansion of the 24-hour service ‘are complex’ but will be part of the taskforce’s remit. Photograph: iStock

The expansion of public transport to 24 hour operation in major cities and towns will be investigated by a new taskforce which aims to promote nightlife in the wake of the coronavirus pandemic.

Minister for Culture Catherine Martin said that the Government gave a commitment to launch the Night-time Economy Taskforce within 30 days and she would announce it next week.

The group aims to look at “innovative approaches to supporting and developing a vibrant, diverse night-time culture and economy in Ireland”, the Minister said during Dáil questions on Culture, Heritage and the Gaeltacht.

She also heard criticisms of the Government’s approach to the arts and music sector amid concerns that the sector had been devastated by the Covid-19 crisis and calls for them to be supported in the July stimulus package.

Ms Martin insisted that she was “fighting” for the sector in the package and acknowledged they had taken a massive hit.

The Minister said the taskforce on boosting night-life economy will include key Government departments, agencies and relevant stakeholders “to bring the necessary knowledge in to make it effective”.

This would include the Give us the Night group which has campaigned for the expansion of night-time cultural events, particularly in relation to music venues and had made a detailed submission.

Labour TD Duncan Smith who raised the issue said licensing laws needed reform. A lot of pubs and restaurants are not open at the moment “and we need to use this time to plan so that they can re-open not only during the day but also through the night,” he said.

He pointed out that it would require the provision of 24-hour public transport in Dublin, Cork and the major cities and towns and he asked that the taskforce report on its progress when the Dáil returns after the summer recess so that “we can have a discussion in early autumn”.

Ms Martin said the Department of Justice would be involved and An Garda Síochána will participate and play a “strong role” in the discussion on reform of licensing laws.

She said the taskforce will consider licensing laws and regulations and the establishment of night-time culture mayors in Cork and Dublin, similar to those already established in other European cities.

The department previously held a symposium to discuss the possibility of “creative nightlife and cultural activities after hours and establishment of pilot projects in Cork and Dublin”.

The Minister said issues such as the expansion of the 24-hour service “are complex” but will be part of the taskforce’s remit whose membership would include the Departments of Justice, of Climate Action and Transport, of Housing and Local Government and of Culture.

“I anticipate that a wide range of public bodies will have a strong role to play in this. The licensing issue will be under the Department of Justice,” Ms Martin said. “That’s why we’ll have An Garda Síochána on the committee and also the Department of Climate Action and Transport.”

People Before Profit TD Richard Boyd Barrett said the cut in the pandemic unemployment payment from €350 to €203 for those earning less than €200 a week had significantly affected thousands of artists.

The Dun Laoghaire TD said there should be a basic income for performers, artists, musicians and crews built from the €350 payment.

Ms Martin insisted that she had been fighting for the sector at Cabinet and in the discussions on the July package.

She was looking at a “suite of measures” of support the arts sector.