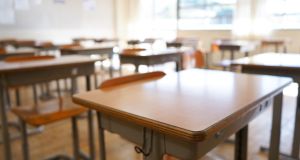 Schools which are due to lose teachers when they reopen are calling for the posts to be urgently restored due to the requirement to physically distance pupils in classrooms. Photograph: iStock

Schools which are due to lose teachers when they reopen are calling for the posts to be urgently restored due to the requirement to physically distance pupils in classrooms.

Dozens of schools are set to lose teaching posts in September as a result of reductions in their enrolment numbers.

The Department of Education said these rules operate in a clear and transparent manner and treat all similar types of schools equally, irrespective of location.

However, teachers and parents argue that reducing staffing will increase pupil-teacher ratios in classrooms and make it much harder to implement public health guidelines.

More than 700 parents at Holy Rosary National School in Wicklow town have signed a petition calling on the department to restore a teaching post it is due to lose in September.

A spokeswoman for the parents’ campaign said a reduction in enrolment of just two pupils out of 463 means the school will lose a teacher.

This, she said, will result in pupil numbers in one class rising from 22 to 33 pupils, significantly above the national average of 26 pupils per teacher.

“This is going to make it so much more difficult to implement heath and safety protocols,” the spokeswoman said. “It could jeopardise the safe return to school and might be the difference between some children going to school part time or full time.”

Many other schools including Rampark National School in Co Louth and Scoil Íde in Clondalkin, Dublin, also face losing teaching post and have called for them to be reversed. Many say they have had their requests for appeals turned down in recent weeks.

Social Democrat TD Jennifer Whitmore said it was incredible that requests to retain teachers were being turned down at a time when social distancing will require schools to have more teachers.

“The Government needs to invest urgently in our schools and providing extra teachers should be a first step in that process,” she said,

“Our class sizes are already one of the highest in the EU and addressing this inadequacy needs to be a focus of Government, particularly post-Covid.”

Under Department of Education rules, there is an average of 26 pupils to every one teacher. If pupil numbers dip below a certain threshold, a school risks losing a teacher.

A spokesman for the department said the process of allocating teachers to primary schools was ongoing and the number of teaching posts that individual schools may lose will not be known until the autumn.

On the issue of complying with public health guidelines, he said the department was engaging school managers, teachers and others to develop detailed guidance and supports for the reopening of schools.

Minister for Education Norma Foley said in a recent parliamentary question that she was “very conscious” of the need to prioritise teacher allocations in primary schools given their vital role in communities around the country.

“I am looking at how best to make further progress in reducing the primary teacher ratio in the context of the programme for Government implementation,” she said.

Department officials are understood to be preparing a school reopening plan – likely to be published next week – with extra substitution cover, administrative leave for principals and detailed guidelines on classroom layouts.

There will also be additional funding for schools for cleaning purposes, say sources, while stocks of hand sanitiser and personal protective equipment are being contracted centrally and will be distributed to schools.