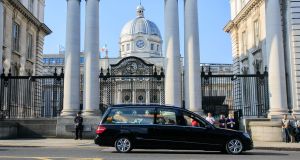 The number of women affected by the CervicalCheck scandal is likely to increase beyond the 221 women currently identified by the Health Service Executive (HSE).

This is because an impending review of smear tests by the Royal College of Obstetricians and Gynaecologists (RCOG) is looking at a substantially wider cohort of women than has been examined by the HSE.

The RCOG review covers all women with a screening history for the past 10 years whereas, it emerged yesterday, the HSE appears to have restricted the number of cases it examined.

Dr Gabriel Scally, who carried out the scoping inquiry into the CervicalCheck controversy, described the criteria used by the HSE to determine which women were affected as “flawed” and predicted more women may be affected.

Dr Scally and Dr Karin Denton, a UK consultant cytopathologist who also worked on the review, told the Oireachtas health committee they were still unclear what criteria the HSE used to select the group of 221 women. Dr Scally said he and Dr Denton were still seeking clarification from the HSE.

The issue relates to the cut-off point used by the HSE to determine the impact on women whose smear test was misread. In 2015, a decision was made that if a woman was diagnosed with cancer more than 18 months after a false negative smear then that may have affected the management of her diagnosis.

Dr Scally said the 18-month cut-off point differed from practice elsewhere and was “undoubtedly flawed” and it was “hard to see the logic for it”.

Dr Denton said they didn’t know whether the cut-off point was subsequently revised and what definition was used in deciding which women to contact.

Asked for clarification, a HSE spokeswoman said it was co-operating with Dr Scally and that further light on the issue would be shed by the RCOG review, which is expected to examine about 3,000 smear tests.

Dr Scally was appearing before the Oireachtas health committee for the first time since his report on the CervicalCheck controversy was published last month.

The report dealt with the failure of the screening programme and doctors to tell women about a retrospective audit that showed smear tests were incorrectly interpreted, potentially preventing them from receiving earlier treatment. Of the group of 221 affected women, 20 have died.

At the start of the meeting, members observed one minute’s silence for two of the women who died at the weekend, Emma Mhic Mhathúna and another, unnamed patient. Ms Mhic Mhathúna was buried in Co Kildare yesterday.

Dr Scally said he was saddened by the deaths, adding they served as a timely reminder of how serious cervical cancer is and of the need to make the disease an increasingly rare event in the future.

A spokesman for the Minister for Health said the Scally report called for a more robust audit process to be enforced. The Minister intends to ensure that recommendation is implemented.

“It is important to state that all women with a screening history over the past 10 years will have their slides reviewed by RCOG. This will provide those women with independent, clinical assurance.”