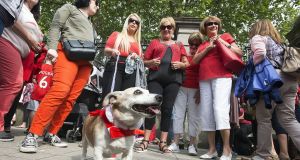 Layla the dog at a protest in support of the 209 women affected by the Cervical Check scandal at Leinster House in May. Photograph: Dave Meehan/The Irish Times

About 30 women who had been diagnosed with a type of cervical cancer have contacted the Health Service Executive with concerns after they were written to as part of an independent review of Cervical Check tests.

All 3,000 women whose smear tests are to be re-examined are being asked for their consent for the review by the UK Royal College of Obstetricians and Gynaecologists.

The college was commissioned to carry out a major review following the recent Cervical Check scandal and the publication of an independent scoping report by Dr Gabriel Scally.

It has been writing to women who developed cancer which was notified to the screening programme or registered with the National Cancer Registry over the past decade. The 3,000 women are being asked for their consent to the review.

In a statement on Friday, the HSE said it was providing “logistical support” to the expert panel in completing its review.

“As part of this, we have been writing to women, or their next-of-kin in cases where women are deceased, who were assessed as eligible to take part in the review to seek their consent,” it said.

“The review includes all those who have developed cancer which was notified to Cervical Check or registered with the National Cancer Registry at the beginning of May 2018, and who had been screened by the National Cervical Screening Programme prior to their diagnosis.

Included within the review is a cohort of women who have been reported to the HSE as having “micro-invasive” cancer.

This is defined as a cancer that has not yet spread locally and which does not usually appear in lymph glands or in distant tissues. While microinvasive cancer rarely develops into invasive cancer it still classified, for the purposes of the National Cancer Registry, as a cancer.

“The HSE is aware of queries from approximately 30 women who had been diagnosed with micro-invasive cancer, who had received a letter and who reported that they were unclear as to the categorisation of their diagnosis following receipt of that letter,” the HSE added.

“In response to these queries, Cervical Check took immediate steps to investigate the issue by engaging with the National Cancer Registry to confirm the clinical data in each case.”

It is providing a dedicated information line to answer any queries from women arising from this process. The HSE did not respond to a query asking it to clarify if the statement meant the 30 women had not been aware that they had previously been diagnosed with microinvasive cancer.

It confirmed that a “small number” of the queries it had received related to letters to women whose initial diagnosis was “carcinoma in situ”. This is a type of pre-cancerous, high-level abnormality in the cells in the cervix.

The HSE said that as these cases did not relate to cervical cancer but rather pre-cancer, they will not form part of the expert panel review.

“The HSE wishes to apologise for any distress that this may have caused to women who received these letters,” it said.