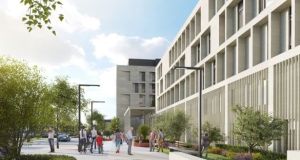 Under the current plans the new National Maternity Hospital would be relocated on the campus of St Vincent’s Hospital at Elm Park.

Minister for Health Simon Harris has denied the planned development of the new National Maternity Hospital may collapse.

He was responding to comments by the deputy chair of the Holles Street hospital, Mr Justice Nicholas Kearns, who told a conference on Saturday there was “very grave concern” the project could fold.

“That’s simply not the case. I am absolutely committed to the delivery of that maternity hospital relocation project,” Mr Harris said.

“I want this project to go ahead but I just want to get it right. I genuinely believe we can get this right. I believe there’s an appetite from Holles Street and St Vincent’s. Both hospitals are committed. I’m very committed. I don’t think it’s particularly helpful for anybody to suggest that anybody else isn’t committed,” Mr Harris said.

He said it was important to say that a number of things had happened. “Thankfully planning permission has been granted. Site selection is in place. There is a Steering group in place.”

He told RTÉ Radio One’s This Week programme on Sunday that he wanted to deliver a National Maternity Hospital that is “women-centred” and “future-proofed” in terms of governance and legal protections.

“I hope to be in a position this year, by the end of this year, to give the green light to this . I’m absolutely committed to the project but I’m also committed to getting it right.”

Asked if the delay related to Holles Street bringing a court challenge over the his decision to establish a fourth inquiry into the death of Malak Thawley, he said: “Not at all.” Ms Thawley died during surgery for ectopic pregnancy in May 2016.

Mr Justice Kearns, addressing the Irish Hospital Consultants Association (IHCA) at its annual conference in Galway on Saturday, said approval for commencement works on the €300 million project had not been given by the Department of Health.

He said work on the pharmacy and car park had to get under way by the end of the year under European energy legislative requirements for new buildings - and that if it did not happen “the whole project will effectively fold, and everything would go back to square one”.

Mr Justice Kearns said there was a deadline of October 1st for this approval for commencement work to be provided but that this did not happen.

“This is a cause in Holles Street of very grave concern and it is shared in St Vincent’s,” the former president of the High Court said.

“It will be an absolute tragedy for the women of Ireland if this project were to be delayed in such a way that the viability of the project after so many years were to be frustrated in this way.”

Mr Justice Kearns said the withholding of approval dated back to the time when Holles Street brought a court challenge over the decision by the Minister for Health to establish a fourth inquiry into the death of Ms Thawley.

He said the Holles Street hospital had been completely vindicated by the trial judge in his ruling in the case.

The hospital was at a complete loss as to why this delay was taking place.

“This is a very, very serious matter,” he added.

Mr Justice Kearns told The Irish Times there was a perception in Holles St that the Department of Heath had an animus toward it arising from the judicial review proceedings it had brought.

An Bord Pleanála granted planning permission for the construction of the €300 million maternity hospital on a site in the middle of the St Vincent’s hospital campus in August 2017.