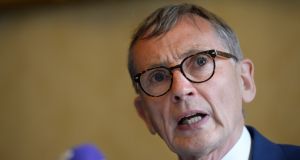 Dr Gabriel Scally said the 18-month cutoff point differed from practice elsewhere and was “undoubtedly flawed” and it was “hard to see the logic for it”. File photograph: Dara Mac Donaill/The Irish Times

More women may be affected by the CervicalCheck controversy beyond the group of 221 people identified by the Health Service Executive, the Oireachtas health committee has been told.

An increase in the number of women affected will “undoubtedly” be the outcome of a further review currently under way, according to Dr Gabriel Scally, who carried out the scoping inquiry into the controversy.

Dr Scally and Dr Karin Denton, a UK consultant cytopathologist who also worked on the review, said they were still unclear what criteria the HSE used to select the group of 221 women.

Dr Scally said the criteria used were flawed and that he and Dr Denton are still seeking clarification from the HSE.

The issue relates to the cut-off point used by the HSE to determine the impact on women whose smear test was misread. In 2015, a decision was made that where more than 18 months had passed before the date of a woman’s cancer diagnosis, it was taken that this may have affected the management of the woman’s diagnosis and she was included in the group.

Dr Scally said the 18-month cutoff point differed from practice elsewhere and was “undoubtedly flawed” and it was “hard to see the logic for it”.

Dr Denton said they didn’t know whether the cutoff point was subsequently revised and what exact definition was used in deciding which women to write to.

Asked to clarify the situation, a HSE spokeswoman said it was cooperating with Dr Scally and that further light on the issue would be shed by the Royal College of Obstetricians, which is examining the smears carried out under CervicalCheck.

Dr Scally was appearing before the Oireachtas health committee for the first time since his report on the CervicalCheck controversy was published last month.

The report dealt with the failure of the screening programme and doctors to tell women about a retrospective audit that showed smear tests were incorrectly interpreted, potentially preventing them from receiving earlier treatment. Of the group of 221 affected women, 20 have died.

Earlier, Dr Scally told the committee a system for compensating people harmed in screening and immunisation programmes should be established.

Dr Gabriel Scally said such a mechanism would remove the need for people to enter into adversarial court proceedings.

In the United Kingdom, the government compensates people affected by adverse outcomes in immunisation programmes, in recognition of the overall benefit of such programmes outweighs any harms that might result, he pointed out.

At the start of the meeting, members observed one minute’s silence for two of the women who died at the weekend, Emma Mhic Mhathúna and another, unnamed patient. Ms Mhic Mhathúna is being buried in Co Kildare today.

Dr Scally said he was saddened by the deaths, adding they served as a timely reminder of how serious cervical cancer is and of the need to make the disease an increasingly rare event in the future.

In any screening programme, there is a balance between benefit and disbenefit, he said. For example, breast-screening programmes can identify cancers early but may expose some women to a small amount of radiation.

In a well-run programme, the benefits will outweigh the disbenefits, he said. A good cervical cancer screening programme should pick up 75 per cent of cancers.

Apologising for the length of time it took to produce the report, Dr Scally said the delay was caused by the poor provision of information in response to queries he made. Information was still coming in from the health service within 10 days of him finalising the report.

He also said he had been unable to get access to the original tender documents for the outsoucing of smear test analysis to US labs. The committee heard these were shredded by the HSE after 10 years. Dr Scally said he could not get these documents because “in an ususual exhibition of efficiency they were shredded in keeping with the policy to shred things after 10 years. In document management that’s about the only example of efficiency I came across but we will be hunting for those contracts and tenders from the organisations that submitted them”.

Dr Scally repeated his view a commission of inquiry into the CervicalCheck controversy was not required. He said his report had succeeded in dealing with a substantial number of issues in depth and that setting up a commission might delay the implementation of its recommendations and distract the system from getting on with what it needed to do now.

Ultimately, however, he said it was a decision for the Oireachtas.