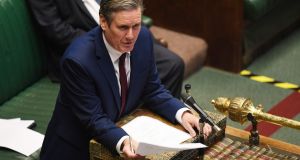 Labour leader Keir Starmer: Asked why a slide with an international comparison of deaths had been dropped from the government’s daily briefing after being shown every day for seven weeks. Photograph: Jessica Taylor/AFP via Getty Images

Boris Johnson has clashed with Labour leader Keir Starmer over the government’s advice at the beginning of the coronavirus epidemic that people in nursing homes were “very unlikely” to become infected.

Britain’s death toll from coronavirus rose by almost 500 on Wednesday to 33,186 and figures from the Office for National Statistics (ONS) suggest that nursing homes accounted for 40 per cent of the deaths.

“It remains very unlikely that people receiving care in a care home or the community will become infected,” it said.

The prime minister denied that such advice had been given, prompting Sir Keir to write a letter accusing him of misleading parliament. Mr Johnson responded by claiming that the Labour leader was quoting the passage out of context, adding that the public expected them to work together during the coronavirus crisis.

Britain’s death toll from the virus is now the highest in Europe and the second highest in the world but Downing Street this week dropped from its daily press conference a slide showing an international comparison of deaths. At prime minister’s questions, Sir Keir asked why the slide had been dropped after being shown every day for seven weeks.

“The UK has been going through an unprecedented, once in a century epidemic and he seeks to make comparisons with other countries which I am advised are premature because the correct and final way of making these comparisons will be when we have all the excess death totals for all the relevant countries.  We do not yet have that data. I am not going to try to pretend to the House that the figures when they are finally confirmed are anything other than stark and deeply, deeply horrifying,” Mr Johnson said.

Transport authorities reported an increase in the number of people on the move as some workplaces reopened on Wednesday following a partial easing of the lockdown. But opposition MPs warned against an early return to normal business at Westminster after Commons leader Jacob Rees-Mogg said he wanted to return to physical sittings as soon as possible to set an example to the public.

Mr Rees-Mogg said the current arrangements, a hybrid of virtual and physical sessions with most MPs asking questions remotely, was unsatisfactory.

“We have no flexibility of questions, no ability for people to come in, to join in the debate, no ability to advance arguments or take them forward. Simply a series of prepared statements made one after another. That’s not the House of Commons doing its proper duty, its proper role of scrutiny of the government,” he said.

But Labour’s Chris Bryant accused the government of showing “a streak of Trump” in trying to bring MPs back to Westminster at the beginning of June.

“There are libertarians in the government who would side with those who want to get rid of the lockdown as soon as possible and if there’s collateral damage then so be it,” he said.