Midwifery during a pandemic: ‘It was a bit like knowing a tsunami was coming’

May 5th marks International Day of The Midwife 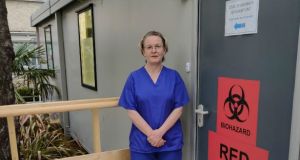 Nora Vallejo, a midwife, standing outside the red zone, in which women with Covid-19 are cared for.

Nora Vallejo has been a midwife for almost 27 years, but she said working during the coronavirus pandemic can sometimes feel like going “against all our instincts”.

Ms Vallejo, who works in the Coombe Women & Infants University Hospital, said that partners are allowed to attend the birth of their child, but then have to leave the hospital again soon after.

“What’s hard is sometimes they’re separated from their partners and that’s hard for them. The partners, too, are worried and apprehensive. They’re leaving them at the door and then waiting for that call to tell them “Yeah, you can come in now”,” she said.

“It’s sort of against all of our instincts as midwives. You want to mind women and you want to involve their partners as much as possible. But now it’s like: “Yeah I’m sorry, now you’ve had your baby, and unfortunately you’ve to say your goodbyes.’ That’s really tough.”

The Coombe hospital has established what they call a “red zone” for women who are positive with Covid-19, or suspected of having the virus, in a bid to prevent the spread of the virus among patients.

Ms Vallejo said prepartion for the arrival of the virus was challenging because it was unclear how it would affect maternity services.

“It was a little bit like knowing a tsunami was coming and you’re like running for your life but thinking ‘well we have to prepare for that’,” Ms Vallejo said.

“You have to screen everybody that comes into the hospital. ‘Have you been in contact with anyone? Are you well yourself? Have you symptoms?’ All those questions. From that point, there’s a different workload in that there’s more things to do but still all the other elements carry on.”

She added that there “hasn’t been a massive amount” of women who were positive for the virus.

Ms Vallejo was speaking in advance of International Day of The Midwife, a global day of recognition and celebration of the work of midwives, on May 5th.

Prof Michael O’Connell, Master of the hospital, commended the “excellent care” midwives have given to women over the past few weeks, despite the challenge of Covid-19.

“The sacrifices they have made, and the dedication to caring for women and babies that they have shown has been particularly inspiring,” he said.

Meanwhile, the Irish Nurses and Midwives Organisation (INMO) has called on policy makers to recognise the work of midwives.

More than 11,000 babies have been born in Ireland’s hospitals since the arrival of Covid-19 in late February, the organisation said.

There are 1,479 staff midwives working in the public health service, which is below the scientifically recommended ratio of one midwife to every 29.5 births, the organisation added.

“While much has been put on hold during the pandemic, childbirth has continued as normal,” said INMO general secretary, Phil Ní Sheaghdha.

“The skill and dedication of midwives not only deserves recognition, but support. Consistent understaffing has put midwifery under pressure, leaving overworked staff to pick up the slack.”

1 Chairman of Fáilte Ireland resigns after it emerged he is holidaying in Italy
2 A million trees, including 400,000 oaks, to be destroyed this week
3 Urgent report on Dublin eviction ordered by Deputy Garda Commissioner
4 ‘It was pitch black’ - Rescued teenager describes night afloat with her cousin in Galway Bay
5 Inside the O’Brien Fine Foods factory in lockdown Kildare
Real news has value SUBSCRIBE