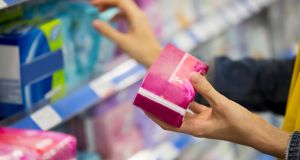 Nearly half of teenage girls across Ireland are struggling to afford sanitary products during their period. Photograph: iStock

Nearly half of teenage girls across Ireland are struggling to afford sanitary products during their period, new research has found.

A survey of more than 1,100 young women aged between 12-19 years shows that nearly 50 per cent of Irish teenage girls find it difficult to afford sanitary towels and tampons, according to Plan International. Some 109 of the young women who participated in the survey said they were forced to use a “less suitable sanitary product” because of the high monthly cost involved.

Nearly 60 per cent of young women said they did not find classes at school on periods helpful while six out of ten reported feeling shame and embarrassment about their period. A small number said they believed they could lose their virginity by using a tampon, while others did not think it was possible to become pregnant while on their period.

Some 61 per cent of Irish girls have missed school because of their period and more than 80 per cent said they did not feel comfortable talking about their periods with their father or a teacher. Nearly 70 per cent take some form of pain relief during menstruation.

Caoimhe Dowling (19), who took part in the survey, said she felt the need to hide her period from friends and family. Now a college student, Ms Dowling says she is struggling to afford her sanitary products. “I’m still not used to looking at the receipt after buying pads and seeing this huge sum that I need to fork over. Pads and tampons are necessities but are still seen as luxury.”

Tampons and sanitary towels are not subject to VAT in Ireland which has a zero rate treatment on women’s sanitary products. The Irish rate was implemented before EU legislation imposed reduced VAT rates on certain goods and services. This legislation has prevented other EU members, like the UK, from reducing their VAT rate on sanitary products to 0 per cent.

In the UK a Tampon Tax Fund was established in 2015 to dedicate £15 million a year generated from its 5 per cent VAT on sanitary products to charities working with women and girls across the country. The UK government has said it will continue the fund until the EU allows a zero rate of VAT to be applied to women’s sanitary products.

In Ireland, sanitary towels can cost anywhere between €2-€6 a pack with the average pack containing 10-15 pads. Tampons range in price from about €1.50-€6 a pack. A 12 pack of Nurofen Ibuprofen pain relief tablets costs €4.20. A woman will have 13 periods a year with some using up to 22 tampons and/or towels per cycle leading to an estimated cost of €132.34 for sanitary products per year.