Number of women affected by CervicalCheck scandal likely to increase 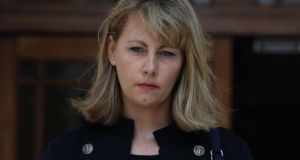 Emma MhicMhathuna has said the delay by the HSE in sending files to the scoping inquiry ‘shows how incompetent they are’. Photograph: Collins Courts

The number of women affected by the cervical screening scandal is likely to increase significantly.

To date the HSE has identified 209 women for whom a clinical audit showed their cancer had been missed by the CervicalCheck programme. Many of these women were not told.

This number is likely to increase as audits are completed on 46 other cases. Twelve of these audits are close to completion, the Public Accounts Committee (PAC) heard on Thursday.

The PAC has also heard there are currently five legal cases being taken against the HSE over its CervicalCheck programme. There are another two potential cases and one case has been settled, that of Vicky Phelan, whose High Court action in April brought the failings into the public eye.

There are also 18 cases relating to the bowel screening programme with another three potential cases, Ciaran Breen of the State Claims Agency (SCA) told the committee.

Members of the committee questioned HSE staff at length about why documents requested by Dr Gabriel Scally, who is conducting an inquiry into the CervicalCheck controversy, were provided in an unsearchable format.

Dr Scally’s scoping inquiry was due to conclude by the end of this month but it will now be August before it is finished.

Fine Gael TD Kate O’Connell told Mr Connaghan that she believes it wasn’t technical barriers that prevented this being done. “There was a different sort of barrier. A human barrier.”

Ms O’Connell continued: “It’s disrespectful to us and to the public. It seems like a deliberate attempt to stop information being received.

“I just kind of wonder what the point of you all is at this stage? It must be meeting ten or 12 and we’re no further. There’s no point in you because you can’t give us answers.

“I think the whole lot of you should be sent packing. This is the middle of June and we’re none the wiser.”

Mr Connaghan said the HSE has hired outside help to assist with providing documents and has committed to providing all requested files within 30 days.

Some other requested documents have not been released at all to Dr Scally. Mr Connaghan told the PAC some documents relating to the contracting of the laboratories which carried out the cervical smear test analysis required legal clearance or the consent of certain parties prior to release.

He said they have now obtained these clearances and will be handing over the contract documents immediately.

Mr Connaghan also told the committee the HSE is assisting Dr Scally in contacting all of the 209 women or their families affected. It has already been confirmed 18 of the 209 are dead.

The helpline set up in the wake of the controversy in April has received 24,000 calls and nearly all of these have been returned, the HSE said. People are still calling the helpline daily but in much smaller numbers, the committee was told.

Independent TD Catherine Connolly told the HSE representatives she is aware of one case where a woman called the helpline and was told to send her query in by email. She did this but has yet to receive a response.

Meanwhile the terminally ill Co Kerry woman Emma Mhic Mhathúna has said the delay by the HSE in sending files to the scoping inquiry “shows how incompetent they are and that it needs to be dismantled”.

Ms Mhic Mhathúna (37) is one of the 209 women with cervical cancer who were found to have received incorrect smear tests during a clinical audit of past tests by the CervicalCheck screening programme after their cancer diagnoses.

She says the fact that the HSE are sending the files only now to Dr Scally’s investigation highlights the incompetency of the organisation.

“It also makes you become more suspicious of why they’re only doing things now when they’ve had months to prepare this,” she told Radio Kerry.

“I’m not surprised and I’m not happy and it’s made me more determined that the HSE needs to be dismantled because they clearly can’t even scan and copy files like you’re taught to do when you’re in secondary school,” she said.