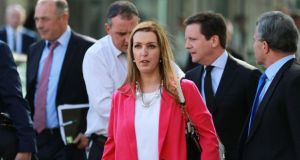 Cian O’Carroll, the solicitor for Vicky Phelan, the woman at the heart of the CervicalCheck controversy, is calling on the Government to make interim payments of up to €50,000 to the women involved.

“Why wouldn’t the Government come forward now to make interim payments? It wouldn’t cost anything extra,” he told RTE’s Today with Sean O’Rourke. Such action would actually cost less in the long run, he said as overall compensation payments would include legal costs.

Mr O’Carroll said he was surprised by yesterday’s revelations by Dr Scally of the drip feed manner in which documents were being provided to him. “I didn’t think the Department of Health could behave that way.

“The idea that he (Dr Scally) had to go on national radio to complain … he still hasn’t received the documents.”

Mr O’Carroll said that the Department of Health was “spinning a line” that Dr Scally’s work was being delayed because he was taking the time to meet with the 209 families affected.

“That is completely untrue.”

He pointed out that the Minister for Health’s inquiry is now being held up by his own department. There was no reason why key documents could not be identified and sent to Dr Scally immediately.

Hospitals had been able to assist families and their legal teams by providing large amounts of documentation in a timely manner yet CervicalCheck could not do so. This suggested, he claimed, that they were not interested. “It suggests a policy of obstruction.”

“Clearly the Minister is not in control of his own inquiry if he is giving instructions and they are not being carried out.

“If the Minister is serious he needs to take a stick and give instructions to his department that things need to be done today.”

Minister for Health Simon Harris responded that the HSE’s actions were “pathetic” and that he would be writing to them today telling them to give the documents requested by Dr Scally in the format that he wants.

The Minister defended Dr Scally’s approach to the scoping inquiry saying that it had been endorsed by the Irish Cancer Society. He said that Dr Scally had not made up the terms of reference for the inquiry, they had been given to him by the Government and Oireachtas Committees.

“He needs to answer as many questions as he can, as quickly as he can.

“Dr Scally is a straight shooter. He will have those answers by the end of the summer.”

Mr Harris said that Dr Scally would continue to provide interim reports and that the quicker he can arrive at a recommendations with regard to the cytology laboratories “would be good.”

With regard to documents requested by Dr Scally, the Minister said he wants him to have them “within days.”

Sinn Féin’s health spokesperson Louise O’Reilly told the same programme that she was not happy that the Minister would describe the behaviour of his own department as ‘pathetic’ and said he needed to do more than “just write a letter.”

The message needed to come from the Minister and the Government that the scoping inquiry was important, she said.