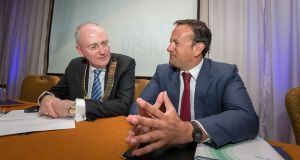 His comments come in the wake of three consultant psychiatrist resignations from the public health service in the southeast due to unsafe working conditions.

A number of other regions, including Dublin and Limerick, have recorded at least eight consultant resignations in the last six months as consultants choose to move to private practice.

Following the settlement of the recent High Court case brought by hospital consultants over back pay, the president of the Irish Hospital Consultants Association Dr Tom Ryan said: “Acute hospital and mental health services are increasingly uncompetitive in recruiting and retaining the number of consultants required to provide timely, high quality, safe care to patients. There are approximately 450 approved consultant posts, a full 15 per cent of the total, which cannot be filled on a permanent basis.”

Mr Ishtiaq warned that consultants “cannot hang around at the pinnacle of their careers waiting for things to improve”.

He added that the move from public to private is most prevalent among procedure-performing consultants who seek to boost their skillset.

“None of us wants to hang around spending days having long liquid lunches like certain parts of the civil service and still have the pay cheque in the bank.

“Consultants who spend years training to do procedures are just not going to let their skills rust away due to lack of beds and operating theatre space.”

According to Dublin GP Dr Ray Walley, 50 per cent of medical staff vacancies in Ireland are due to resignations from the public hospital system.

He expressed concern that Ireland is losing highly experienced and hardworking clinicians who train medical trainees while the State is “as ever mute”.

Colleagues are “fed up” at being unable to provide the services they are trained to perform due to long waiting lists and procedure cancellations, he said.

“Medics have had enough of working in a feckless public system.”

According to the IMO, consultants are resigning from the public system at a rate of one to two per month.

A HSE spokesperson said its database cannot report on retrospective information relating to consultant resignations but noted that 258 hospital consultants were hired last year while 122 have been taken on to date this year.

Increased frustration was shown by consultants at Cork University Hospital last year when a group campaigned to change their contract to allow them to perform off-site private work.

The consultants called for the change amid increasing difficulty in getting patients into the hospital for treatment due to elective surgery cancellations and long waiting lists.