Three resignations may leave southeast without psychiatric services for children 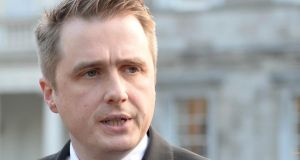 Fianna Fáil TD for Wexford James Browne said it was his understanding all other Child and Adolescent Mental Health Service staff working under the psychiatrists “can no longer effectively do their jobs because they’ve no one to oversee them”. Photograph: Eric Luke

Dr Kieran Moore, a specialist consultant paediatric psychiatrist, on Wednesday told the Joint Oireachtas Committee on the Future of Mental Healthcare that he and two of his colleagues from the southeast region were resigning.

“I’m resigning from Wexford because it’s untenable and unsafe and two of my colleagues are doing the same,” he said.

Dr Moore said patients were coming into a building that “is in a state” and where staff are “burnt out”. He said mental health services required continuous funding and “looking after the people who look after patients”.

The prevalence of those suffering from mental health problems was increasing, he said, describing the issue as “a national emergency”.

Senator Joan Freeman, the chair of the committee, which was examining staffing difficulties in psychiatric services, said that unless the psychiatrists are replaced “there will be no services for children” in Wexford and Waterford.

“I personally find that extremely disturbing,” she said.

Fianna Fáil TD for Wexford James Browne agreed, saying: “There’s 3.6 full time equivalents [psychiatrists] down there; one is on sick leave and the other 2.6, if you like, are leaving. So from August 1st there’s going to be no psychiatrist”.

Mr Browne said it was also his understanding that all other Child and Adolescent Mental Health Service (CAMHS) staff working under the psychiatrists such as psychologists and occupational therapists “can no longer effectively do their jobs because they’ve no one to oversee them”.

Dr Moore added “where I work in Wexford, there are five managers, none of them is clear about what they do”.

“Honestly if we’re to talk about staff recruitment and retention, the one thing that works is if people feel valued and they don’t,” he said.

In a statement, the HSE said it was currently operating a national and international recruitment campaign for consultant child and adolescent psychiatrists.

“South East Community Healthcare plans to draw on this resource to fill positions on a permanent basis, in addition to vacancies being filled on an interim or temporary basis,” it said.

Declan O’Hanlon, of the Irish Hospital Consultants’ Association, told the committee that of 44 consultant psychiatrist posts advertised in 2015 and 2016, about one-quarter had no applicants and 30 per cent had one applicant.

“The failure to fill consultant psychiatrist posts is severely undermining the quality and quantity of the psychiatry service that can be provided to patients,” he said.

Peter Hughes, general secretary of the Psychiatric Nurses’ Association said a recent survey of the union’s branches suggested there were about 500 nursing vacancies in the mental health services with shortages expected to “exacerbate significantly” in the next four years.

Rosarii Mannion, the HSE’s national human resources director, said it is likely to face a changing industrial relations environment that may add to the challenges impacting on the overall attracting, recruitment and retention of staff.

“Another significant emerging issue is the possible fallout from Brexit on the health workforce both in Ireland and in Britain and Northern Ireland over the next number of years,” Ms Mannion said.