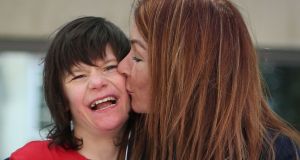 Charlotte Caldwell pictured with her son Billy (12) earlier this week before his admission to hospital. Photograph: Yui Mok/PA Wire

The British home office is returning a severely epileptic Co Tyrone boy’s medicinal cannabis oil after confiscating it from his mother at customs.

Charlotte Caldwell tried to bring the medication into Heathrow Airport in a last-ditch effort to treat her 12-year-old son Billy but it was removed by border officials.

After a week of pleading with the home office during which she accused a minister of likely signing the boy’s “death warrant”, the British government has relented.

Home secretary Sajid Javid announced on Saturday that he had used his powers to “urgently issue” a licence to treat Billy with cannabis oil.

“This is a very complex situation, but our immediate priority is making sure Billy receives the most effective treatment possible in a safe way,” he said.

“We have been in close contact with Billy’s medical team overnight and my decision is based on the advice of senior clinicians who have made clear this is a medical emergency.

“The policing minister met with the family on Monday and since then has been working to reach an urgent solution.”

A family spokesman said the medication was on its way to London’s Chelsea and Westminster Hospital early on Saturday afternoon.

On Monday, Ms Caldwell (50), from from Castlederg, Co Tyrone, Northern Ireland, flew with the boy and a six-month supply of the medication used to treat up to 100 seizures a day into the UK airport from Toronto, Canada.

She went on to accuse policing minister Nick Hurd of having “likely signed my son’s death warrant” ahead of a meeting.

On Saturday, she said the boy’s condition had worsened since the medication ran out and warned that his seizures had intensified, pushing him into a “crisis situation”.

But, she added, the home office had been working with the family “extremely hard” throughout the night to negotiate access to the medication.

Ms Caldwell credits the oil with keeping the boy’s seizures at bay, saying he was seizure-free for more than 300 days while using it.

Billy started the treatment in 2016 in the US, where medical marijuana is legal.

He became the first person in the UK to receive a prescription after his local GP in Northern Ireland, Brendan O’Hare, began writing scripts.

Dr O’Hare was summoned to a meeting with Home Office officials recently and told to stop. - PA

People must calculate risk of Christmas gatherings – WHO doctor