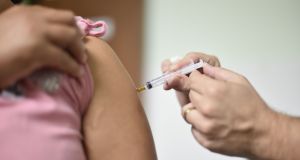 Giving nurses chocolates and entering them into draws for iPads may help boost immunisation levels among healthcare workers across the State, a public health specialist with the HSE has said.

Addressing a meeting of the Oireachtas health committee, the HSE’s assistant national director for public and child health, Dr Kevin Kelleher, said the uptake of vaccinations among healthcare workers increased during the last flu season from 22-31 per cent.

Dr Kelleher noted a particular issue around nurses who refuse to avail of influenza vaccinations, which are encouraged to stop the spread of infection in hospitals.

“Our problem has primarily been around nurses, around their uptake of the vaccine, and we’ve been working very hard to try and understand that,” he told TDs and Senators.

“You need to have leadership in the institutions concerned and predominantly leadership from the nursing profession – it makes a big difference. And incentives work as well.”

He added that the level of uptake in Ireland remains very low and pointed out that the State lags far behind the UK, as well as the US, where immunisation for healthcare workers is mandatory in some states.

“He should look far deeper into why they are not taking up the vaccine,” Mr Doran told RTÉ’s Today with Seán O’Rourke.The comment was “totally objectionable” he added, and said Dr Kelleher should respect the decision of nurses and midwives who chose not to avail of the vaccine.

Speaking on RTÉ’s News at One, the head of the HSE Immunisation Office, Dr Brenda Corcoran, backed up her colleague’s statement that incentives such as chocolates were working.

The Oireachtas committee also heard that there has been a significant fall in the number of teenage girls taking the HPV vaccine that prevents cervical cancer in later years.

When it was was first introduced the take-up rate was 87 per cent – which was close to the World Health Organisation targt of 95 per cent – but had since fallen to 50 per cent, due to what were described as “unfounded fears” over HPV.

Dr Collette Bonner, deputy chief medical officer of the Department of Health, told the committee the fall was attributed to concerns that had no basis. She said the consequences were very serious, with unvaccinated women more likely to be infected by the virus.

She also warned that decisions taken by parents not to vaccinate their children had wider implications for others.

“Such a decision may put their own life and that of their child at risk, and it may also put at risk other vulnerable individuals that they come into contact with, especially people with a reduced immunity such as sick and elderly vulnerable patients.”