A user of Touch Bionics's bionic hand, the i-digits, demonstrates the difference the artificial limb can make in the ordinary lives of people who may not have the full use of their hand. Video: Touch Bionics 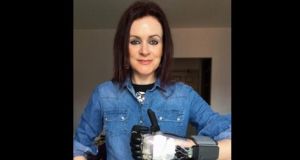 Niamh Boyle developed a life-threatening infection after the birth of her fourth child and subsequently developed sepsis.

A bionic hand has allowed a young mother to do essential everyday tasks for the first time since losing fingers to sepsis.

“After eight months without the use of my left hand it felt fantastic being able to do tasks with it again,” said Niamh Boyle (32) who developed the life-threatening infection after the birth of her fourth child last year.

When she woke from a medically induced coma she was told she would have to have all the fingers on her left hand amputated; she also lost toes on her right foot.

Niamh, a mother of four from Haggardstown, Co Louth, has spent the last week being trained in how to use the high-tech prosthetic iLimb at a specialist company in Co Galway.

She is now waiting for her bespoke hand to be delivered and allow her to live as normal a life as possible.

“The training with the prototype hand involved doing every day tasks such as peeling vegetables, picking up and putting down different-sized objects at different heights and opening various packets and boxes and bottles.”

Niamh wants everyone to know the signs and symptoms of sepsis and to always ask doctors if they have checked for it.

“Now I know that a severe pain in your elbow or knee can be a sign of it. The most common signs are shivering from a fever or cold, extreme pain or discomfort, pale or discoloured skin, sleepiness or difficult to rouse, feeling like you might die and shortness of breath.”

Niamh and husband Liam have baby Ardan (8 months) as well as his brothers Euan (2), Rian (5) and Ohran (6) and Niamh is fundraising to cover the estimated €65,000 cost of the iLimb digits hand.

It can be controlled using an app, resembles a bionic hand and with it Niamh even played the guitar again.

“They are custom-made by Touch Bionics in Scotland and this week I visited Apos in Galway who took the mould for it and I meet the trainers.”

The silicone mould for her bespoke hand has been sent to Scotland to begin the process of making the inside customised socket.

The last task for Niamh was to go grocery shopping. “We went to a local Tesco with the Touch Bionics guys and I used the hand for pushing the trolley, putting items into the trolley, packing the shopping bags and lifting them into the boot of the car.

“It was a bit odd in the supermarket as I felt everyone was looking at me, especially because it wasn’t the finished hand so wires and tape were visible”.

“I am so excited to get the finished hand. I am going to miss it [the prototype] so much while the real thing is being made,” Niamh added.