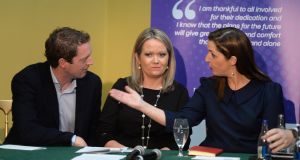 The full facts of the CervicalCheck “debacle” are still not known, one of the women caught up in the controversy has said.

Lorraine Walsh, a patient representative on the Government-appointed CervicalCheck steering committee, has called for mediation to help rebuild trust and relationships between the hundreds of women affected and the medical community.

Addressing a conference on learning lessons from the controversy surrounding the cervical cancer screening programme this year, Ms Walsh said “everyone” needed to learn lessons from what had happened.

The controversy broke last April when it emerged women diagnosed with cervical cancer had not been told of an audit of their previous smear tests, carried out after their diagnosis.

In many cases, the audit results were different from the original test results, and this may have led to different treatment routines and outcomes for some of them.

Ms Walsh had a smear test under CervicalCheck in June 2011 and was told to have a repeat smear after six months as the result was low-grade pre-cancer cells, she told the conference organised by the Royal College of Physicians in Ireland (RCPI).

The second smear the following year showed high-grade pre-cancer cells and she was sent for a colposcopy. In June 2012 she received a diagnosis of cervical cancer, at 34 years of age.

“I was devastated,” she said.

Surgery removed the cancer but her fertility was impaired. “The IVF failed, my ovarian reserve went through the floor and I was advised that chances of success were slim to none. The hope faded and reality hit home. I fell apart and plunged into what I can only describe as a grief-filled tunnel that was very hard to escape from.”

She began to come to terms with her loss and to pick herself up. “Cancer for me meant the end of our opportunity to become parents and it was heart-breaking. But, as they say time, is a great healer and I comforted myself with thoughts of fate and destiny deciding our future and it was a life without children.”

Then, after the CervicalCheck controversy broke last April, she got a call to return to the colposcopy clinic as an audit had been carried out on her smears prior to diagnosis.

“I attended the Cervical Check clinic and was told that the screening cytology prior to my diagnosis was read inaccurately. It had been reported at the time as low-grade CIN1 pre-cancer cells, but following the review it was reported as high-grade CIN3 pre-cancer cells. Immediately after this disclosure followed some explanations about screening and its limitations.

“Truthfully, my mind was blown. I had not heard about these limitations or false positives or false negatives before. I wanted to know the bottom line, what detail did the audit find and did it fall within the limitations of screening or was there negligence involved?”

She says she still thinks about the “what ifs”, and also whether she would have been better off not knowing this information.

“The answer is absolutely, I would have avoided a lot of heartache and upset if I hadn’t learned of this information, but who has the right to withhold information about my life and my body from me? Nobody.

“Had this CervicalCheck information not emerged in public view, would we be still sending slides to labs that are not accredited and outsourcing to other labs resulting in more slides being misread?”

The report by Dr Gabriel Scally into the scandal found the US labs used by CervicalCheck were not compliant with the “apparent contractual requirement” for ISO15189 accreditation but were compliant with US regulatory requirements.

Ms Walsh said there are two major aspects to the current debacle that have affected patients both physically and mentally, one being negligence on the part of the labs and the other being non-disclosure of the audit results.

Ms Walsh said that what had happened involved a major trust and communications issue.

“I can’t change the past, I am where I am and I must accept that. I accepted my role to try to help change the future, so that we learn from the errors of the past and move forward to create a better system to serve the women and men of Ireland.

“There are lots of questions and answers still outstanding, we all know that. I accepted a role as patient representative on the CervicalCheck Steering Committee appointed by the Minister for Health for one reason and one reason only. I can’t change the past, I am where I am and I must accept that.

“I accepted my role to try to help change the future, so that we learn from the errors of the past and move forward to create a better system to serve the women and men of Ireland.

“Everyone needed to learn from what had happened.

“And we are now in a situation that we still don’t know the full facts of this debacle. Frustrating I am sure for the clinicians and heart wrenching and confusing for the patients and families. There are no winners here,” said Ms Walsh.

“I have no doubt in my mind that I would probably not be alive today without the Cervical Check Screening programme and the wonderful clinicians that gave me back my life - but of course I now wonder had my smear been read accurately, would I be at home with my children around me today, or would women like Irene Teap, Emma Mhic Mhathúna and others be alive to see their children grow up?”

The 221+ group of patients would shortly be writing to the Medical Council and other medical bodies with an invitation to come together through medication to build relationships and build a better future for patients and their clinicians, she told the meeting.