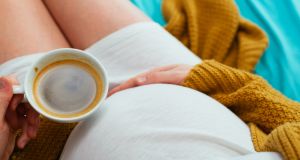 Women who drink coffee while pregnant are putting their unborn child at a “substantially larger” risk of stillbirth, low birth weight, childhood acute leukaemia and childhood obesity, a study published in the British Medical Journal warns.

Current advice in Europe and the United States is that pregnant women can safely consume up to two cups of moderate-strength coffee per day. If the findings of this study are accepted widely, however, coffee could be added to the list of foodstuffs pregnant women are told to avoid, including shellfish, soft-boiled eggs, rare meat, liver, pates, soft cheeses, mayonnaise and most oily fish.

Prof Jack James, of Reykjavik University in Iceland, reviewed 1,261 scholarly articles on adverse impact of caffeine on fetuses, published up to last October.

Of these, 32 identified increased caffeine-related risk and 10 suggested no or inconclusive associations.

Caffeine-related risks were reported for all pregnancy outcomes being looked at by Prof James, apart from pre-term births.

“Consequently, current evidence does not support health advice that assumes ‘moderate’ caffeine consumption during pregnancy is safe,” he said.

“On the contrary, the cumulative scientific evidence supports pregnant women and women contemplating pregnancy being advised to avoid caffeine.”

Caffeine, when consumed during pregnancy, “readily crosses the placenta, exposing the fetus to concentrations of the drug similar to systemic levels in the mother”, the study found. The rate of transmission slows as the pregnancy advances making caffeine consumption most dangerous in the first trimester.

The risk of miscarriage increases by between 32 per cent and 36 per cent among caffeine-consuming pregnant women, says Prof James, and the chances of a still birth rises by between two- and five-fold.

He found “maternal caffeine consumption is associated with an increased risk of childhood acute leukaemia”. One study found high maternal caffeine consumption was associated with a 65 per cent increase in the risk of acute lymphocytic (lymphoblastic) leukaemia and a 58 per cent increased risk of acute myeloid leukaemia, the most common cause of cancer death in children.