Some are socialising recklessly, he warns, as Nphet prepares to meet Monday to consider ‘any necessary recommendations’ 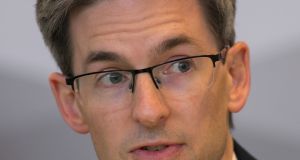 Acting chief medical officer Dr Ronan Glynn said the National Public Emergency Team will meet on Monday to review and discuss the case figures “and will make any necessary recommendations to Government which are required to protect the vulnerable, continue with the resumption of healthcare services and ensure the safe reopening of our schools.” File photograph: Gareth Chaney/Collins

There have been 66 new cases of Covid-19 reported on Sunday, the Department of Health has confirmed.

There have now been a total of 27,257 confirmed cases in the State.

The news follows the reporting of an additional 200 cases on Saturday.

Acting chief medical officer Dr Ronan Glynn said the National Public Emergency Team (Nphet) will meet on Monday to review and discuss the case figures that have been reported in recent days “and will make any necessary recommendations to Government which are required to protect the vulnerable, continue with the resumption of healthcare services and ensure the safe reopening of our schools.”

He said the phased reopening of the country has afforded people the opportunity to socialise with each other again. “However, some are doing this recklessly and undermining the efforts of the majority of people around the country who are following public health advice. This cannot continue. This pandemic isn’t over just because we are tired of living with it,” he warned.

“We must all learn to behave and interact in a new way over the coming months so that Covid-19 cannot take root again in our communities. Please avoid crowds, reduce your social contacts, keep your distance from others, wash your hands and wear face coverings,” he said.

No further deaths have been reported on Sunday to the Health Protection Surveillance Centre leaving deaths to date from the virus at 1,774 .

Of the cases notified today, 34 are in men and 29 are among women, with 67 per cent among those under 45 years of age.

A total of 12 are confirmed to be associated with outbreaks or are close contacts of a confirmed case while three cases have been identified as community transmission. The remainder of the cases are still under investigation.

Most of the cases were again in Kildare which recorded 21 new cases. Dublin has 16 new cases while there have been six in Limerick, and the rest of the 23 cases are in Clare, Donegal, Laois, Louth, Meath, Monaghan, Offaly, Roscommon, Sligo, Tipperary and Wicklow.

The HSE is working to identify any contacts the patients may have had to provide them with information and advice to prevent further spread.

In a post on Twitter on Sunday, Minister for Health Stephen Donnelly confirmed that “serial testing” will begin in direct provision centres and meat processing plants this week, in light of the recent clusters of cases occurring in congregated settings.

Inside Politics · Coronavirus: are we losing control?

A number of our recent cases/clusters were in congregated settings such as Direct Provision & Meat Processing Plants. We’ll start serial testing people in DIrect Provision centres (about 7,500) later this week 1/2

A nationwide serial testing prog of Meat Processing Plants will also start this week. Serial testing already happening in nursing homes. Mass serial testing can help, but to suppress transmission each and every one of us must play our part to help protect ourselves & others 2/2

They expressed deep concern at the figures released on Saturday evening which showed 200 new cases of the virus had been diagnosed, the largest number of cases reported in a single day since the beginning of May.

There will be a further analysis of the situation ahead of a meeting of the Cabinet Committee on Covid -19 on Tuesday.

The rate compares with 18.6 for the UK, 41.2 for France, and 16.3 for Germany. Spain, which is experiencing a high number of cases in Catalonia, has a rate of 115.7, according to the latest figures from the European Centre for Disease Prevention and Control (ECDC). The rate in Portugal is 26.

The Taoiseach said the number of new cases of the disease reported in the State on Saturday was deeply concerning.

“This morning I discussed the evolving situation with the Tánaiste, Green Party leader, health minister and acting CMO,” he said on Twitter.

The Government and the National Public Health Emergency Team (Nphet) will continue to monitor the situation closely,” he added.

The Government needs to outline its plan to “wrestle back control” of coronavirus amid a “concerning” spike in cases, Sinn Féin TD David Cullinane said.

He called for the Government to detail its plan for the next two weeks in order for schools to be given the chance to reopen.

“I think everybody will be concerned and the acting chief medical officer has expressed deep concern too,” he told RTÉ’s This Week programme.

“We have to have a plan and strategy in place that wrestles back control of this virus.”

Mr Cullinane said various indicators of the diseases were on the up including the reproduction rate and the level of community transmission.

Dr Glynn said on Saturday the country now has “multiple clusters with secondary spread of disease and rising numbers of cases in many parts of the country”.

The figures from the ECDC are used by the Government for deciding which countries should be on the so-called green list for travel purposes.

Countries that are on the list had a lower rate of infection than Ireland when the list was drafted.

People coming here from countries that are on the list are not being asked to go into quarantine for 14 days.

However the Government’s general advice is that people should not travel abroad unless it is necessary to do so.

The green list is due to be updated this coming week. When the list was first drafted, the Republic’s infection rate was approximately five per 100,000.

Michael Osterholm, director of the Centre for Infectious Disease Research and Policy, at the University of Minnesota, told RTÉ radio’s This Week programme that the US is likely to see an “explosion” of cases in the coming weeks as teenagers and young adults return to education.

He said the transfer patterns among teenagers and young adults is very different to that of children, who are much less likely to transmit the disease.

In Minnesota, day care centres for children have been open all summer, without that causing much difficulty.

Mr Osterholm has recently urged a second and more effective lockdown in the US.

“If you do well by health, you will do well by the economy,” he said.