147 new cases but no further deaths reported in the State 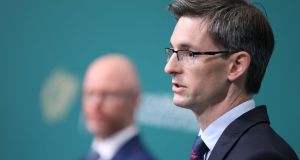 The State’s public health emergency team has issued a “note of caution” about rising numbers of Covid-19 cases in Dublin where people should take “extra care” to prevent spreading the virus.

There were a further 147 confirmed cases of the coronavirus disease reported by the National Public Health Emergency Team, including 73 in Dublin. No further deaths were reported.

This brings total confirmed cases to 28,116 with the death toll from the virus remaining at 1,777.

Acting chief medical officer Dr Ronan Glynn told a press briefing that there was not a major problem with rising cases in Dublin over the last number of days but that it was “something that we are watching closely.”

“It is not an alarm; it is simply a note of caution for people to take care and take all the basic measures,” he said, referring to the long-standing public health measures that people should follow and last week’s specific guidance to avoid house parties and other larger gatherings.

The increased cases in Dublin were spread across the county but the number of infections were “slightly higher” in Dublin West, Dublin North West and Dublin North Central, he said.

“Unlike what we saw in Kildare, Laois and Offaly, there isn’t one or two defined clusters guiding this in Dublin. It is spread out across areas, across settings, across workplaces and with a significant proportion of community transmission,” he said.

There was “no suggestion” that a county lockdown or any further restrictions were needed in Dublin and that if people followed guidance, the benefits would be seen next week, said Dr Glynn.

Countrywide, there were 27 confirmed cases of Covid-19 in hospitals, including six in critical care units, and that this was up from 17 last Thursday. “We do need to monitor that very closely,” said Dr Glynn.

He challenged claims from some commentators that the pandemic was now a “case-demic”, that public health officials should “stop worrying” and that “the virus has weakened.” “That is simply not the case,” he said. If cases kept rising, “it will only be a matter of time before it spreads into other groups,” he said.

Dr Mary Favier, president of the Irish College of General Practitioners, acknowledged the anxiety amongst parents with schools reopening this week.

She said parents should not worry about children who “have a runny nose for every single day of winter” but should “start to pay attention” when children have a high temperature, a cough or other respiratory symptoms and should keep them home for 48 hours until symptoms settle.

Dr Glynn said it “won’t be a surprise” if there are cases among schoolchildren but the challenge was “to response to that appropriately and listen to the appropriate information sources.”

There were 84 children under the age of 14 last week who tested positive for Covid-19 and overall children under 14 accounted for less than three per cent of cases.

“The vast, vast majority who have Covid have very mild, if any symptoms,” he said.

“If we can suppress this and keep this low in our community, we can protect our children and protect our education system.”

Dr Glynn said he didn’t believe that it was possible to pursue a strategy to eliminate Covid-19 completely and that Nphet’s strategy was to “keep the cases as low as possible” and to protect education, vulnerable people and healthcare.

There were two new Covid-19 outbreaks reported at direct provision centres, in Bray and in Limerick and eight new cases spread over all eight outbreaks in these centres.

Separately, another 10 cases of Covid-19 have been reported across Northern Ireland in the past 24 hours.There have been no more deaths.

The first pupils have returned to schools across Northern Ireland since the coronavirus lockdown started in March. Some parents have expressed concerns while teachers’ unions say educators had not been given enough time to respond to rules issued earlier this month.

Northern Ireland’s chief medical officer Dr Michael McBride has insisted it is safe to return. However three schools did not reopen following the detection of Covid-19 cases.