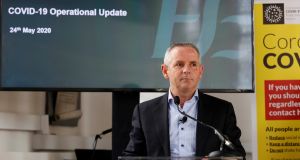 Four more people with Covid-19 have died, according to the Department of Health, bringing the State’s death toll from the disease to 1,608.

In a statement on Sunday evening, the department said the Health Protection Surveillance Centre has been notified of 57 new cases of the disease, meaning there are now 24,639 confirmed cases of Covid-19 in the Republic.

The statement said that of the confirmed cases, 57 per cent are female and 43 cent are male, and the median age is 48.

Some 3,222 people (13 per cent of cases) have been hospitalised, of whom 394 have been admitted to intensive care. A total of 7,819 cases are associated with healthcare workers.

Earlier, the chief executive of the HSE said reducing physical distancing to a metre would create “significant extra capacity” to manage patients but this was for the State’s emergency health team to decide.

At a briefing in Dublin, Paul Reid said that the current two metre distancing rule was reducing the volume of patients that could be handled by the State’s health service and was having “significant implications” for capacity in emergency departments and outpatients’ waiting rooms.

A one-metre limit would improve capacity in managing outpatients and emergency departments, he said, but that the HSE would be guided by the State’s National Public Health Emergency Team (Nphet) that was managing the response to the Covid-19 pandemic.

Mr Reid was responding to growing political debate about whether the two-metre rules should be relaxed in line with the World Health Organisation rule to keep a distance of one metre.

HSE chief clinical officer Dr Colm Henry said that the health service was following Nphet on the “best international advice” and also on how other countries were emerging from the initial stages of the pandemic and “how they are refining that distance or otherwise.”

“For the moment it is two metres based on the best available evidence that we have,” he said.

On Sunday, Labour Party leader Alan Kelly urged Minister for Health Simon Harris to carry out an audit on the effect of this change on increasing capacity in health services to treat more patients.

This follows a discussion at the Cabinet meeting on Friday evening where several Ministers pushed for the physical distancing rule to be reduced to one metre.

On Saturday, Taoiseach Leo Varadkar said there had been no change in the advice from Nphet and that the public health advice to maintain the two-metre distance still stands.

Meanwhile, Mr Reid said the number of residential care facilities with Covid-19 outbreaks in the HSE’s highest risk category has fallen to seven, down from 75 a month ago.

He said there are 51 people with the coronavirus disease in intensive care unit (ICU) beds, down from 76 two weeks ago.

Mr Harris announced on Saturday he had established a Covid-19 nursing home expert panel which will examine how the Government responded to the pandemic as well as assessing best practice for the months ahead.

There has been widespread concern over the number of deaths associated with residential care facilities, with more than 60 per cent of all Covid-19 deaths in Ireland related to care homes.

The decision comes following a recent National Public Health Emergency Team (NPHET) recommendation. The panel will report to the Minister by the end of June 2020.

Mr Reid said the HSE had completed a report into why 244 Covid-19 cases at the Mater Hospital in Dublin dating back to March were not reported until mid-May. He said he had submitted the report to the Department of Health’s secretary general Jim Breslin on Friday.

He confirmed the report concluded that the Mater did meet its legal obligation on the reporting of the cases and that testing and contact tracing was completed on the cases.

The report recommends changes to validating data between health reporting agencies and other hospitals had provided assurances that they were uploading data correctly, he said.

The late reporting of the 244 historical cases led to the number of new Covid-19 cases being reported by the department to 426 on May 13th.

The Mater, the main infectious diseases hospital in the State, had insisted that it reported all cases of positive results to the relevant authorities on a daily basis and that it complied with all its reporting requirements, though said that the data may not have been accurately captured.”

Mr Reid said the HSE planned to carry out two studies in June to test the population to try to measure the scale of infection and immunity amongst the public to Covid-19.