Kennedy Summer School to be postponed until next year 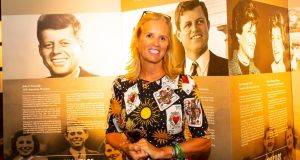 Kerry Kennedy, daughter of Robert F Kennedy, was inducted into the Irish-America Hall of Fame during the Kennedy Summer School in 2018. Photograph: Mary Browne

The Covid-19 pandemic continues to impact on Irish tourism with news that two of the country’s best-known summer schools have been postponed because of the virus.

The organisers of the Kennedy Summer School in New Ross, Co Wexford, which commemorates the late US President, John F Kennedy, have announced that this year’s event scheduled for September will be postponed until 2021.

And the organisers of the Spirit of Mother Jones Festival in Cork, which commemorates Irish-born US labour leader Mary Harris, have announced that they are deferring this year’s event from the end of July until November.

“The health and safety of the community in New Ross, our speakers, patrons and our organising committee, together with all our partners, are of the utmost importance to us,” said Mr Keilthy in a statement.

“After closely monitoring the risk and impact of Covid-19 over the past two months, and speaking at length with members of the organising team, the Kennedy Summer School New Ross has been officially postponed.”

Dr Robert Mauro of Boston College, who had been working on organising the US guests for the Summer School, said recent developments regarding Covid-19 made it impossible to effectively and safely run this year’s event,

“It has been a difficult decision to postpone the 2020 event in New Ross. However, it would be unrealistic to expect all of our US guests and speakers to travel at this time,” said Dr Mauro.

“The future evolution of this pandemic in the US is much unknown at present and aside from the organisational aspects for the Kennedy Summer School 2020, the health and well-being of our guests and speakers must come first.”

Meanwhile, James Nolan of the Cork Mother Jones Committee said the committee had decided to move this year’s festival to the last weekend in November in the interests of the safety of those attending.

“We feel the November date allows for more certainty. It also gives us the option of perhaps using online technology to ensure the festival can go ahead.”

Mr Nolan pointed out that Mother Jones, who was born Mary Harris in Cork in 1837, died on November 30th, 1930, so holding the festival the end of November will allow them to mark the 90th anniversary of her death.

And he said how gratified it was for the organising committee to hear President Michael D Higgins evoke the spirit of Mother Jones when he recently quoted her when praising health workers in the fight against Covid-19.

“The fact President Higgins quoted Mother Jones’s famous line ‘Pray for the dead and fight like hell for the living” to honour our front line and emergency workers was an acknowledgement of her role in protecting workers.”

Mr Nolan said that day thousands of people around the world still draw inspiration from the work of Mother Jones, who survived three fever pandemics, as she continued to fight for improved conditions for workers.

“She survived the Great Famine here in Cork, the Yellow Fever outbreak in Memphis in 1867, when she continued to practise as a nurse despite losing her family to the fever, and the flu pandemic of 1918/19,” he said.

“Although we are moving this year’s festival, we intend to ensure Mother Jones will be celebrated around the time of her birth in July/August and closer to the original dates we will see the most practical way to celebrate her birth in Cork.”