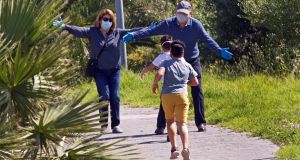 Two children run towards their grandparents, who they had not seen in the last two months, in Algeciras, Spain. Photograph: EPA/A Carrasco Ragel

Coronavirus has infected more than 4.6 million people across the world and killed more than 311,000, according to a tally kept by Johns Hopkins University.

Many countries are starting gradual easing of lockdowns imposed due to the Covid-19 pandemic, however. Greece and France have reopened some beaches, German soccer’s Bundesliga has become the first major sports league to resume and people in the Chinese city of Wuhan were dancing again on Saturday night – but all with tight restrictions to prevent a resurgence of coronavirus.

China reported five new cases of coronavirus on Sunday, as the commercial hub of Shanghai announced the restart of classes for many young children from June 2nd.

Of the new cases, two were imported and three were domestic infections in the northeastern province of Jilin that has seen a small spike in cases of unknown origin.

In Shanghai, pupils retain the option of continuing to follow classes online rather than facing virus testing and social distancing measures to be imposed at schools. As in Beijing and other cities, Shanghai has already restarted classes for older pupils preparing for exams.

No new deaths have been reported in China for the past month, but Jilin added one fatality retrospectively, bringing China’s total death toll to 4,634 out of 82,947 cases reported since the outbreak was first detected in the central city of Wuhan late last year.

Meanwhile, the number of domestic flights has returned to 60 per cent of pre-outbreak levels, exceeding 10,000 per day for the first time since February 1st. No passenger numbers were given.

The city kicked off a campaign on May 14th to look for asymptomatic carriers – people who are infected but show no outward sign of illness – after confirming last weekend its first cluster of Covid-19 infections since its release from a lockdown on April 8th.

India on Sunday extended a nationwide lockdown to May 31st, as cases exceeded 90,000 and further clashes erupted between police and stranded migrants.

Schools, malls and other public places will remain mostly closed, though rules will be relaxed in areas with low numbers of cases, according to an order from the interior ministry.

Large gatherings are still prohibited, but outside of containment zones with high numbers of active cases “all other activities will be permitted”, it said, potentially allowing commerce and industry to reopen across much of the country.

India has now reported more cases than China, although deaths, at 2,872, remain much lower than China’s 4,600.

India’s lockdown, introduced on March 25th and extended several times, had been due to expire at midnight on Sunday. The curbs have sparked a crisis for the hundreds of millions of Indians who rely on daily wages to survive. With no work – and little public transport – many urban migrants attempting to return to their home villages have set out on gruelling journeys on foot or hitched rides in the back of trucks. In Rajkot in the western state of Gujarat, more than 1,500 migrant workers blocked roads, damaged more than a dozen vehicles and threw stones at police on Sunday, after two special trains that were supposed to take them home were cancelled.

The UK government is investing a further £84 million in the hunt for a coronavirus vaccine. Business secretary Alok Sharma said the additional funding would support teams at Oxford University and Imperial College London engaged in the global race to find a vaccine that could finally end the devastating pandemic.

The announcement came as the latest department of health figures showed 34,636 people have now died in hospitals, care homes and the wider community after testing positive for coronavirus in the UK, up by 170 from the day before.

The increase of 170 is the lowest such figure since the UK’s lockdown began.

British prime minister Boris Johnson admitted on Sunday that there was public frustration with his government’s measures to ease the coronavirus lockdown following widespread criticism of the new rules, which he admitted were complex.

As a poll for the Observer newspaper indicated growing dissatisfaction with Mr Johnson’s handling of the crisis, he wrote in the Mail on Sunday paper: “I understand that people will feel frustrated with some of the new rules.”

On Wednesday, ministers began a gradual easing of restrictions in England, with people who could not work from home encouraged to return to their jobs whilst being told to avoid using public transport if possible. The changes do not apply to people in Scotland, Wales or Northern Ireland, whose semi-autonomous governments have not eased the lockdown. There has been criticism that the government’s message on the easing is confusing and sent out mixed messages. People are forbidden to invite friends and relatives into their homes, for example, but can allow in prospective homebuyers for property viewings.

The daily death toll from Covid-19 in Italy fell to 145 on Sunday, the lowest such figure since March 9th, against a rise of 153 the day before, Italy’s Civil Protection Agency said, while the daily tally of new cases fell to 675 from 875 on Saturday. The total death toll since the outbreak came to light in the country on February 21st now stands at 31,908, the agency said. The number of confirmed cases amounts to 225,435, the sixth-highest such tally in the world, behind those of the US, Spain, UK, Russia and Brazil.

Italian premier Giuseppe Conte acknowledged reopening the country’s economy brings a risk of new outbreaks of coronavirus, but said “we must accept it”.

Shops, bars, cafes, restaurants, hairdressers and museums are among the business and cultural activities that can resume in Italy from Monday. Gyms and swimming pools can reopen a week after. Travel between regions and into Italy from abroad will be permitted from June 3rd.

Mr Conte said the country must accept the risks and open before the availability of a vaccine. But he said an extensive monitoring system is in place and the government will intervene to close areas if there are new outbreaks.

Spain has registered its first daily death toll of fewer than 100 since declaring a state of emergency two months ago. Its health minister said regional authorities have reported 87 new deaths, the lowest such daily count since March 16th.

Spain reported more than 900 deaths a day at the height of its outbreak. The country of 47 million has had 27,650 fatalities in total and 277,719 infections from Covid-19. The latest figures came as prime minister Pedro Sánchez said he will ask parliament for what he hopes will be the last extension of Spain’s state of emergency, keeping it in place until about late June.

Belgium reported another 47 deaths from coronavirus on Sunday, bringing its total casualties to 9,052 – more than any other country in the world, relative to population. As the European nation prepares to further ease containment measures as of Monday, the number of patients in intensive care units increased by seven to 371.

Churches throughout Greece have opened their doors to the faithful after two months. They limited the number of congregants and dispensed disinfectant outside, but Communion was given using the same spoon. Those who flocked to churches for Sunday Mass sat three chairs apart and observed social distancing of at least 5ft from each other.

Kuwait and Qatar both said on Sunday they would start jailing people or fining them thousands of dollars for failing to wear a face mask to combat the novel coronavirus. Kuwait’s health ministry said anyone caught could face up to three months in prison, while Qatar state TV reported the maximum penalty there would be three years. In Kuwait the maximum fine stood at 5,000 dinars (€15,000) and in Qatar 200,000 riyals (€51,000). The six Gulf states have reported a total of more than 137,400 infections with 693 deaths from the virus.

The figures take the country’s tally to 2,289 confirmed cases, including 97 fatalities. A total of 222 patients have been discharged after recovering.

Most of the country’s Covid patients are in the capital Khartoum, where authorities imposed a round-the-clock curfew in April to stem the spread of the virus.

Egypt will bring forward the start of its curfew by four hours to 5pm and halt public transport from May 24th for six days during the Eid holiday, as it seeks to curb the spread of coronavirus, its prime minister announced on Sunday. Shops, restaurants, parks and beaches will be closed for the extended holiday at the end of the holy Muslim month of Ramadan, and restrictions on citizens’ movements will remain in place for at least two weeks afterwards, prime minister Mostafa Madbouly said.

Egypt has reported 11,719 cases of Covid-19, including 612 deaths. Daily increases in the number of cases have been rising as the government slightly eased a night curfew and other measures. The number of cases rose by 491 on Saturday, the health ministry said.

The country reported 13 new cases of coronavirus over a 24-hour period, raising hopes a fresh outbreak linked to nightclubs in Seoul may be waning.

The additional figures released on Sunday by the Korea Centres for Disease Control and Prevention brought the national tally to 11,050 with 262 deaths.

After weeks of a slowdown in new cases, South Korea’s daily increase in new cases averaged about 30 for several days, mostly associated with nightclubs in Seoul’s Itaewon entertainment district.

Officials did not say how many of the 13 new cases were linked to night spots in Itaewon.

Venezuela has reported its biggest one-day increase in confirmed coronavirus cases since the pandemic hit the South American nation.

Vice-president Delcy Rodriguez said the 45 new cases bring Venezuela’s total to 504, with 10 deaths. Officials have reported a relatively low number of cases since the first were discovered in mid-March.

But while Venezuela has reported relatively few cases so far, health experts say its hospitals are especially vulnerable to being overwhelmed.

President Nicolás Maduro ordered a nationwide lockdown shortly after the first cases emerged, and he recently extended it until mid-June.

Officials say that 35 of Saturday’s cases involved people returning to Venezuela, including several on a flight from Peru.

Brazil’s confirmed cases of the novel coronavirus rose on Saturday past those of Spain and Italy, making Brazil’s outbreak the fourth largest in the world, according to official figures.

US president Donald Trump said his administration was considering numerous proposals about the World Health Organisation, including one in which Washington would pay about 10 per cent of its former level of funding to the organisation.

New York state, the epicentre of the US outbreak, has reported 139 new deaths related to coronavirus, the lowest daily figure since March 26th, governor Andrew Cuomo said at a press briefing.