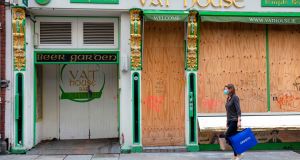 A woman wearing a protective face covering walks past a boarded-up bar in Dublin. Photograph: Paul Faith/AFP via Getty Images

Severe restrictions on commercial and social life came into operation for the second time this year at midnight on Wednesday, as political pressure on the Government over a breakdown in the Covid tracing system intensified.

The restrictions, which will be in place for the next six weeks and are among the most severe in Europe, will be enforced by new powers for gardaí which are expected to be in place by next week, according to the Government.

Thousands of retail premises and other businesses shut their doors on Wednesday night, while hundreds of thousands of workers will now be obliged to work from home from Thursday.

Amid criticism from the Opposition, both Taoiseach Micheál Martin and Minister for Health Stephen Donnelly admitted that they learned of the breakdown in tracing only when they read The Irish Times story published on Tuesday night.

The Irish Times reported that thousands of close contacts of positive Covid-19 cases from over a three-day period would not be contacted by the HSE because the contact tracing system was overwhelmed by cases last weekend. Instead, the HSE on Wednesday asked 2,000-2,500 people who had tested positive for Covid to tell their close contacts to contact their GPs immediately to seek a test.

On Wednesday night, in a sign of further tensions between politicians and officials, Tánaiste Leo Varadkar told Fine Gael TDs that it was “very unfair” of the HSE to “dump” on general practitioners the responsibility to resolve the tracing controversy.

At a meeting of the Fine Gael parliamentary party, Mr Varadkar said that while the testing capacity was holding up well, the contact tracing side of the system was not going so well. One person present said the Tánaiste said he was disappointed to hear a HSE spokesman “dumping this all on them”.

But a senior HSE source disputed Mr Varadkar’s characterisation and said GPs’ organisations had been involved in discussions on how to resolve the difficulties.

“GPs are not being asked to find contacts, they are being asked to answer calls,” the source said. Once close contacts are phoned by the person who has had a positive test, they are asked to contact their GPs to arrange a test.

The HSE source said the gap in contact tracing was not considered a “major operational issue” and had not come to light when Ministers and senior officials were discussing the new lockdown, announced on Monday night.

On Wednesday, the National Public Health Emergency Team announced a further three deaths from Covid-19 and an additional 1,167 cases. The North recorded five deaths and 1,039 cases.

Separately on Wednesday night, the Cabinet approved the publication of a Bill to ban evictions for the period of the Level 5 restrictions. The proposals are due to be debated in the Dáil on Thursday.

And the Department of Finance confirmed that the costs to the exchequer of the six-week lockdown would be added to this year’s budget deficit.

An additional €1.25 billion will be borrowed following the lockdown announcement, moving the deficit from 6.2 per cent of GDP to 6.5 per cent. The Department of Finance insisted on Wednesday that the movement in the deficit was “still well in the range of other countries”.

The budget deficit this year is now expected to be about €23 billion, the department confirmed, an increase on the €21.6 billion estimated in last week’s budget. The Government will spent about €80 billion running the State this year.