Further measures may be needed for anti-mask clashes - McEntee 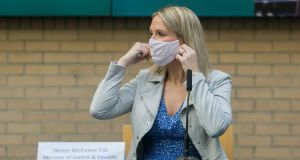 Minister for Justice Helen McEntee has said there there was a need to explore further what measures are needed to deal with violent clashes involving anti-mask protesters.

Ms McEntee said that everybody had a right to protest peacefully but where incidents seem to get out of hand there was “a need to ensure that An Garda Síochána has an ability to respond”.

She was referring to scenes last weekend where opposing groups, including anti-mask protesters and counter-protesters, became involved in clashes in Dublin City centre.

“It is never acceptable for any form of violence, be it at a protest or otherwise,’ said Ms McEntee.

“I would encourage people in the midsts of this pandemic not to gather in large groups.”

She said gardaí had brought the skirmishes under control quickly but added that these scenes seemed to be continuing every weekend.

She said the Cabinet was looking at the potential for introducing fines for incidents such as these, similar to the on-the-spot fines that had been introduced in England for Covid-19.

Ms McEntee and Minister of State James Browne were speaking at an event where they briefed the media on the €3 billion funding for the Department of Justice. She said the funding would allow over 1,000 extra Garda staff be recruited, accelerate digitalisation of Justice, as well as provide substantial new resources to deal with the Covid-19 pandemic.

She said the funding would pave the way for the an additional 620 Garda recruits as well as 500 administrative staff for the force.

The Minister is having ongoing discussions with Minister for Public Expenditure Michael McGrath about additional funding between now and the end of the year for Operation Fanacht, the nationwide deployment of gardaí to ensure compliance with Level 3 restrictions.

The Department received €27 million in funding for Covid-related measures. The new funding will allow An Garda Síochána increase its fleet of vehicles, fund over-time payments, as well as procure extra PPE clothing and equipment.

The Garda has already got the go-ahead for the purchase of 70 new cars for its fleet, replacing cars hired for Covid-use with new vehicles for permanent use in the Garda fleet. These will be funded by a supplementary estimate for 2020.

Ms McEntee said she was happy to have secured €42 million to modernise digital and ICT operations in the Department. She also said that addressing domestic, sexual and gender based violence were key priorities for her as Minister for Justice, and she was pleased to have secured additional funding in both these areas.

It included an allocation for the implementation of the recommendations of the O’Malley Report on Protections for Vulnerable Witnesses in the Investigation and Prosecution of Sexual Offences.

Ms McEntee said that Operation Fanacht was a Garda operation to remind people of their obligation to comply with Level 3 restrictions. She said it had been introduced not to try and catch people out but to encourage them to restrict their movements and work from home, as the virus was increasing.

Checkpoints set up on major arterial roads throughout the State in the early days of the operation were the subject of criticism because they caused long tail-backs.

Mr Browne’s responsibilities include the regulation of the gambling industry. His predecessor David Stanton had worked on progressing legislation to regulate the €10 billion industry, including the establishment of the office of a gambling regulator. Mr Browne said the area was vast and complicated and it would be 2023 before the regulator was in place.